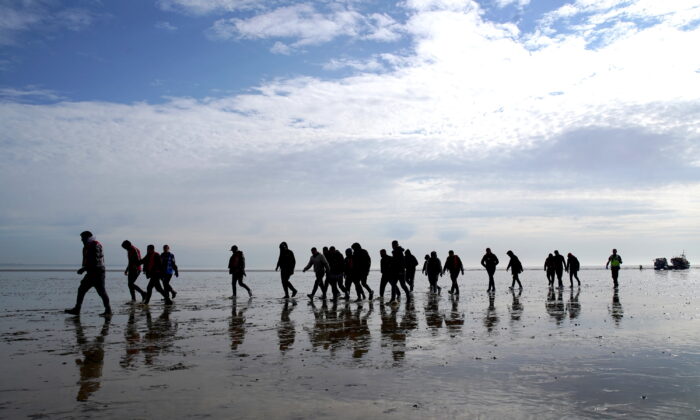 A group of people thought to be illegal immigrants walk up the beach after being brought onboard the RNLI Dungeness Lifeboat in to Dungeness, Kent, on May 17, 2022. (Gareth Fuller/PA Media)
UK

Two reports published on Wednesday and Thursday criticised the Home Office over its response to the surging number of illegal immigrants arriving in the UK in small boats.

One said the border force’s approach to preventing the journeys was “ineffective and possibly counter-productive,” while the other said the initial processing of those who arrived has been “ineffective and inefficient.”

The reports recommended the Home Office improve its initial processing performance, organise more appropriate vessels for search and rescue, turn boats around when possible, quickly remove illegal immigrants to a third country for processing, and negotiate a deal with France to return illegal immigrants who sailed from the country.

In 2021, nearly 84 percent of all small boat arrivals were male, and almost three-quarters were aged between 18 and 39.

David Neal, the independent chief inspector of borders and immigration, said in a report (pdf) that the Home Office dealt with the immigrants poorly due to a “refusal” to transition from an emergency response to establishing better systems and procedures.

Neal’s report on the initial processing of small boat arrivals in Dover was submitted to the Home Office on Feb. 24, but it was not published until Thursday, two days after Neal publicly said he became “increasingly frustrated” over the delay of its publication.

The report said the Home Office failed to proactively identify and safeguard those who are vulnerable and the data collection was “inexcusably awful.”

“Equipment to carry out security checks is often first-generation and unreliable. Biometrics, such as taking fingerprints and photographs, are not always recorded,” Neal said.

According to Neal, the Home Office told inspectors that 227 migrants had absconded from secure hotels between September 2021 and January 2022, some were not biometrically enrolled.

The report also said part of the reason the identification process was undermined is that staff assumed the small boat arrivals are likely to claim asylum and therefore would not want to hide from the Home Office.

The report said an officer described how she “reported a concern about an agitated young girl she had noticed who was accompanied by a man” and the 6-year-old turned out to be unaccompanied.

But the inspectors were told staff members do not have the capacity to proactively identify children, single women, and people with other vulnerabilities, such as trafficking victims, but were “mainly reliant on migrants coming forward to say they have issues.”

However, the absence of translators meant communication was limited, including for the purpose of collecting basic information such as names and ages.

According to Home Office data cited in the report, between Sept. 1 and Dec. 27, 2021, around 90 percent of small boat arrivals were male. More than one in five (22.5 percent) were 18 and under, and most are older teens over 15 years old.

Neal said the workforce had “responded with enormous fortitude and exceptional personal commitment, which is humbling,” but “there was a lack of effective and visible leadership.”

He said the key stumbling block to addressing the challenges was that the Home Office continued to consider channel crossing an “emergency” instead of a new norm, meaning the department “was in a constantly reactive state.”

In the Home Office’s response published along with the report, the department said it had transformed the process since the inspection was carried out, which was in December 2021 and January 2022, and that “much of this report is now of a historic character and the criticisms identified reflect processes and procedures not now followed under the new operation.”

In a separate review (pdf) of the UK’s Border Force, former Australian foreign minister Alexander Downer said the Border Force Maritime command has been “ill-equipped” to deal with a challenge that is “all consuming.”

“The size and capability of the Border Force Maritime command predates the escalation in small boat crossings and the task in the Channel now consumes nearly all available resources to the command, with other operational activity being undertaken on an exceptional basis only,” the review said.

“A further frustration is that to sustain the Border Force operation in the English Channel, officers from elsewhere are being drafted into the maritime command which detracts from other important activities that should be undertaken at ports across the country. The current resource requirements in the Channel are not sustainable.”

As small boats carrying migrants are flimsy and overloaded, they are all considered “vessels in distress.”

As a result, Border Force has been “effectively rescuing people and then escorting them into port and enabling them to enter the UK,” Downer said. “It is unsurprising that there is some public disquiet about this issue.”

The operational command in the Channel has been taken over by the Royal Navy after the Home Office asked for help, but vessels from both departments are not designed to conduct search and rescue.

In his recommendations, Downer said the Home Office should contract for vessels better suited to the task and place them under the command and control of either the Coast Guard or Royal Navy. He also said he was pleased that such plans were already being developed.

To deter immigrants from making the dangerous and unnecessary journey from France, Downer said the UK government should keep “all legal and operationally feasible options,” including turning boats around “when it is safe and legal to do so” using “contracted vessels and specialist crews.”

The Home Office previously said it was considering pushing boats back to the French side of the channel, but abandoned the plan ahead of a judicial review of the policy.

Downer had a similar experience in Australia. He recommended the UK quickly move illegal arrivals to a third country for processing, which he said would reduce “the risk of the removal process being frustrated,” and “avoiding a running commentary” on the number of people removed.

“The eligibility for removal should embrace all cohorts of people who enter the UK illegally,” he added.

Since the UK’s exit from the European Union, the Dublin Regulation, which enables E.U. countries to return asylum seekers to the first E.U. country they arrived in, no longer applies to the UK. As a result, few illegal immigrants were successfully returned. An effort to sign a new bilateral deal with France has so far been unsuccessful.

The Home Office has been planning to ship illegal immigrants to Rwanda after signing a deal with the east African country in April, but the first chartered flight was cancelled after the immigrants’ lawyers sought intervention from UK courts and the European Court of Human Rights.

Before signing the Rwanda deal, the UK government spoke about plans for third-country processing of asylum seekers. However, the deal announced in April was for the Rwandan government to process the relocated immigrants, providing asylum or other opportunities to stay in the country.