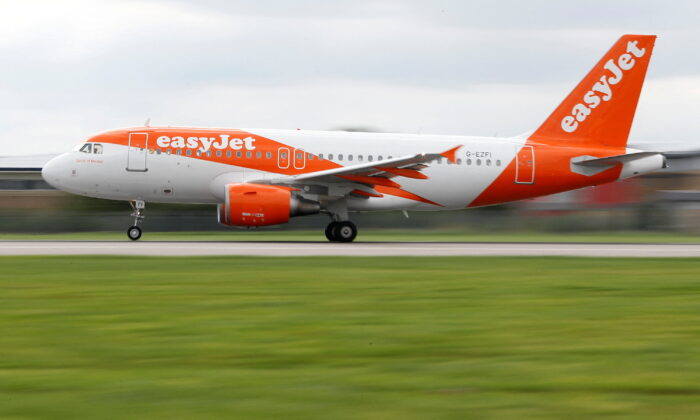 An easyJet Airbus aircraft takes off from the southern runway at Gatwick Airport in Crawley, Britain, on Aug. 25, 2021. (Peter Nicholls/Reuters)
UK

Thousands of holidaymakers have found themselves stranded abroad after hundreds of return flights to the UK were cancelled.

Tourists returning from half-term breaks from Europe are stuck after major airlines cancelled flights over the weekend and on Monday morning.

Families hoping to return after the half-term school holiday and the four-day Platinum Jubilee weekend found that there were scrapped returns from popular tourist destinations such as Bilbao, Madrid and Seville in Spain, Milan and Palermo in Italy, Geneva and Zurich in Switzerland, and Malta.

British Airways axed more than 100 short-haul flights at Heathrow on Monday and Tui Airways is cancelling six daily flights in Manchester. EasyJet flights at Gatwick were also cancelled on Monday. After cancelling dozens of flights over the weekend, easyJet scrapped a further 26 due to arrive at or depart from Gatwick on Monday.

Some 225 departures from UK airports were cancelled between Monday and Friday last week, according to aviation data firm Cirium, compared with 24 during the corresponding half-term week last year.

Airlines had also cancelled hundreds of flights on the eve of the bank holiday weekend because of staff shortages.

Travel consultancy The PC Agency estimated that at least 15,000 passengers were affected by “last-minute changes” to flights on Sunday.

PC Agency Chief Executive Paul Charles posted on Twitter on Sunday that there was “little hope of getting back tonight” and warned of “major knock-on effects.”

“It will take three days to clear the backlog,” he added.

The airline industry has seen a rise in demand for travel following COVID-19 lockdowns. But airlines and airports made thousands of staff redundant during the pandemic and are now struggling to recruit new workers amid a severe staffing shortage.

The government’s COVID-19 travel restrictions were completely lifted on March 18.

Last week, Transport Secretary Grant Shapps blamed the chaos on travel firms, accusing them of having “seriously oversold flights and holidays relative to their capacity to deliver” despite government warnings.

On June 1, Shapps said that airline bosses should have been preparing for a surge in passenger demand following two years of travel closures.

Shapps told the BBC on Sunday that the aviation industry cut too many jobs during the pandemic and it must not oversell flights. He added that the government would not temporarily allow more foreign workers in.

This was in response to airlines calling on the government to issue special immigration visas to allow them to recruit overseas workers.

“The answer can’t always be to reach for the lever marked ‘more immigration.’ There is not some pull that is going to relieve this,” he said.

PA Media and Alexander Zhang contributed to this report.