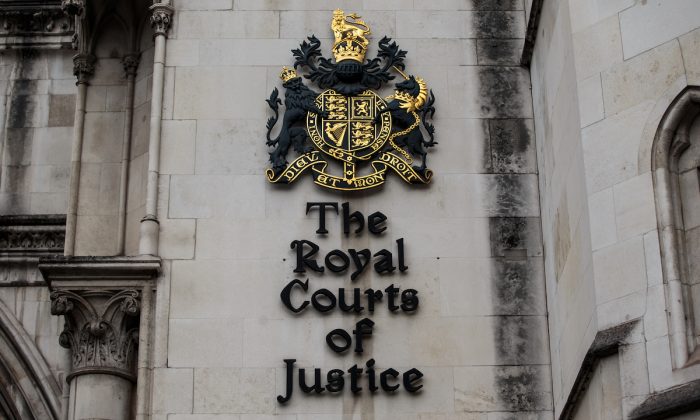 A general view of the Royal Courts of Justice in London, home to the High Court, on Oct. 8, 2018. (Jack Taylor/Getty Images)
UK

In the first case of its kind, the British High Court has upheld the government’s decision to strip a British-born man of his citizenship after he traveled to Syria as a student to join ISIS.

The judge on Aug. 7 also rejected arguments that Ashraf Mahmud Islam, who had dual British-Bangladeshi citizenship, should be repatriated to be tried under British law in lieu of facing justice in Syria, where he could face the death penalty.

Justice Pepperall said in the ruling that Islam’s current detention and risk of the death penalty was “entirely because of his own actions in traveling to Syria and engaging in jihad.”

Islam was just 18 when he traveled to Syria in 2015 from Dhaka, Bangladesh, where he was studying at a British educational establishment.

Two years later, the British interior minister revoked his British citizenship in a letter dated July 17, 2017, sent to his father.

Taking action that leaves a person stateless is illegal under international law. However, like Britain’s infamous so-called jihadi-bride Shemima Begum, his dual UK-Bangladeshi citizenship provides legal cover for the government.

After years of silence, Islam resurfaced in a military prison in Kurdish-controlled north-eastern Syria in the spring of 2018, writing to his father for help, and telling ITV in an interview that October that he had “made a mistake” after traveling to “help the Syrian people,” according to the court documents.

"I realise I made a mistake and I want to go back."ITV News investigation reveals Britain's bid to stop jailed Isis member as he begs to come "home" – while his captors demand he be moved on. Read how we tracked his UK links: https://bit.ly/2JjaYgu

His father lodged a legal appeal in the UK, which ended up in the High Court, asking for a judicial review.

Justice Pepperall however, rejected the case as having “no merit.”

He rejected legal arguments that allowing Islam to be tried in Syria would be a violation of European rights law because he could face the death penalty.

No Violation of Rights

The European Court of Human Rights has previously ruled it wrong to deport some individuals to face the death penalty.

However, the judge said that the same arguments did not apply here.

“It is not clear how the home secretary is under any legal duty to make arrangements to repatriate Ashraf in order that he can be tried in the UK.”

Trump: ISIS Will Be ‘Gone by Tonight’

“Ashraf got himself to Syria and might well have committed serious criminal offenses in the Middle East.”

‘However repugnant his possible fate might be to British values, any British citizen who commits serious crimes abroad is subject to local justice and cannot simply demand that the British government extricates him from a situation of his own making in order that he can face the more palatable prospect of justice in a British court.”

The judge noted that Islam was born in London and “appeared to have every advantage in life,” living with his father, a barrister, and his mother.

Pepperall said that Islam’s father believes his son was not involved in armed conflict, but said this “would appear to be rooted more in hope than hard fact.”

Pepperall rejected the characterization of his father as a “meddlesome busybody” saying that he appeared to be a acting as a “loving father who was deeply affected by the issues.”

The Only US Jihadi Bride in the Camp

Shemima Begum’s parents have also lodged a legal appeal against the decision to revoke her citizenship.

Begum traveled to Syria as a schoolgirl, aged just 15, from her home in London to join the so-called caliphate. She gave birth in the spring of 2019 in a Kurdish refugee camp, after sparking controversy with a number of interviews in which she expressed little remorse, prompting the government to revoke her citizenship.

Begum was staying in a refugee camp of 40,000 people, home to the estimated 1,500 people who traveled from Western nations, predominantly Europe, to join ISIS.

ISIS Bride Shamima Begum Could be ‘Hanged’ if Sent to Bangladesh Instead of Britain: Report

The only person among those 40,000 who is thought to have traveled from America, Hoda Muthana, has also been blocked from returning by the U.S. Government.

Her family, too, is challenging the decision in the courts.

Muthana, 24, is alleged to have been a prominent online agitator for ISIS, marrying three members of the terrorist organization after she traveled to Syria in 2014.

Having been tracked down by media in a refugee camp, with an 18-month-old son, in February she expressed her wish to return to the United States.

On Feb. 20 the United States said she won’t be allowed back into the country.

A civil complaint filed by her father, Ahmed Ali Muthana, on Feb. 21 claims that his daughter’s right to citizenship cannot be unilaterally revoked—citizenship that does not exist, according to an earlier statement by Mike Pompeo.