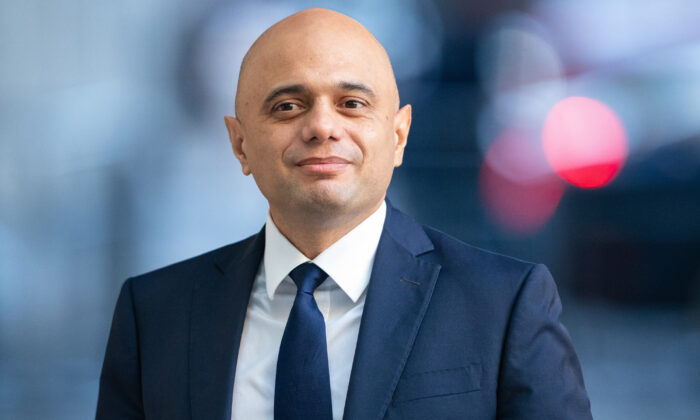 UK Health Secretary on Mandatory Vaccines for General Public: ‘I Don’t Think That Is Something We Would Ever Look At’

The UK’s Health Secretary Sajid Javid said on Sunday that he believes it’s unlikely the government will ever consider mandating COVID-19 vaccines for the general population.

His comments came as Austria announced plans to make the shots compulsory and demonstrators took to the streets across Europe protesting tighter restrictions.

The UK government, which is responsible for health policies in England, has made CCP (Chinese Communist Party) virus vaccination a condition of employment for all frontline health and social care workers, but Javid said it’s not something ministers would consider for the general population.

“It is up to Austria, other countries, to decide what they need to do. We are fortunate that in this country, although we have vaccine hesitancy, it is a lot lower than we are seeing in other places,” the health secretary said on the BBC’s “The Andrew Marr Show.”

“I just think on a practical level, taking a vaccine should be a positive choice. It should be something—if people are a bit reluctant, we should work with them and encourage them,” he added.

“In terms of mandatory vaccines for the general population I don’t think that is something we would ever look at.”

While not mandating vaccinations, the use of vaccine passports remains an option in England’s COVID-19 autumn and winter plan.

Scientists are hopeful that the booster jabs rollout and natural immunity from the summertime spread of the more transmissible Delta variant should help the UK escape the surge in infections seen in parts of Europe.

Professor Sir Andrew Pollard, one of those behind the creation of the Oxford/AstraZeneca vaccine, said it is “unlikely” the UK will see a rise similar to parts of Europe.

He told BBC One’s Andrew Marr Show: “We’ve actually had some spread (of the virus) going on since the summer, and so I think it’s unlikely that we’re going to see the very sharp rise in the next few months that’s just been seen. We’re already ahead of that with this particular virus, the Delta variant.”

Professor of public health at the University of Edinburgh, Linda Bauld, said while the picture remains “uncertain,” there are a number of factors which could help the UK avoid the situation seen in other countries.