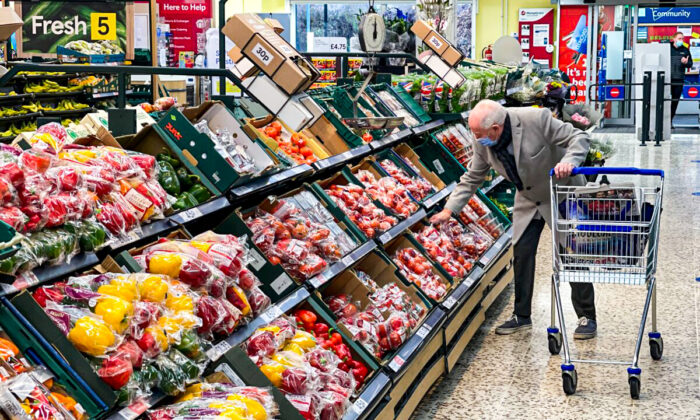 A customer shops for food items inside a Tesco supermarket store in east London, on Jan. 10, 2022. (Daniel Leal/AFP via Getty Images)
UK

Grocery price inflation in the UK has hit its highest level in 10 years, data company Kantar has revealed.

The cost of groceries is now 5.2 percent higher than it was a year ago, and the price inflation over the latest four weeks is the highest since April 2012, according to the latest data.

As a result, “more and more we’re going to see consumers and retailers take action to manage the growing cost of grocery baskets,” said Fraser McKevitt, head of retail and consumer insights at Kantar.

Consumers are increasingly turning to cheaper products and supermarket own-brand labels, and more and more people are making fewer trips to stores to save on fuel costs, the firm said.

At the same time, grocery shops are adapting their pricing strategies in response to the rising cost of goods.

McKevitt said: “One trend we’re already tracking is the move away from selling products at ‘round pound’ prices. The percentage of packs sold at either £1, £2, or £3 has dropped significantly from 18.2 percent last year to 15.9 percent this March.”

McKevitt said it is “no surprise” that sales are down over the latest period, because consumers are now more confident about eating out with friends and families again.

People have also been grabbing food and drink from supermarkets while travelling or at work, he said.

According to McKevitt, while the CCP (Chinese Communist Party) virus pandemic has been the dominant factor driving shopping behaviour, the impact of rising inflation is growing “as the cost of living becomes the bigger issue on consumers’ minds.”

As consumers’ shopping behaviour shifts, the number of visits households make to supermarkets has been dropping. On average, people made 15.4 visits to the supermarket last month, compared with 15.6 trips in March 2021.

“Higher fuel prices could be playing a role here too as people try to save petrol by visiting the supermarkets less often—something for us to keep a close eye on over the coming weeks,” said McKevitt.

Some shifts in shopping habits developed during the pandemic have become permanent, particularly in online shopping.

Online sales made up 12.6 percent of total sales in March, compared with just 8 percent three years ago.

Researchers found that shoppers over 65 were the biggest adopters of online shopping, with 18 percent of them using it compared to 9 percent three years ago.

Discounters Aldi and Lidl remained the fastest-growing supermarkets during the period, with both seeing sales up 3.6 percent over the 12 weeks compared with a year ago.