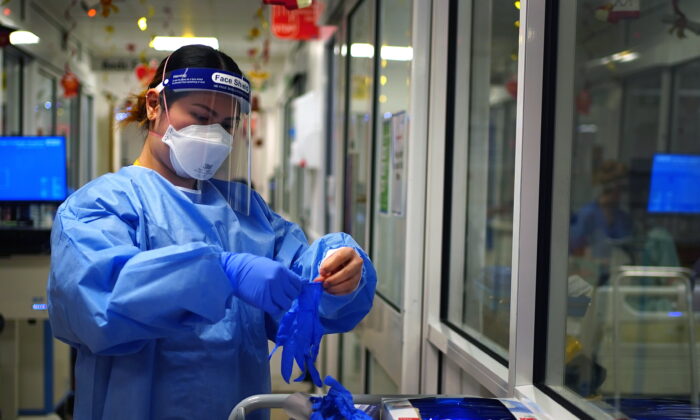 A nurse puts on PPE in a ward for COVID-19 patients at King's College Hospital in south east London on Dec. 21, 2021. (Victoria Jones/PA)
UK

The UK government’s use of a so-called “VIP lane” to award millions of pounds’ worth of contracts for personal protective equipment (PPE) was unlawful, the High Court has ruled.

The Good Law Project and EveryDoctor took legal action over nearly £600 million ($822 million) of contracts awarded to pest control firm PestFix and hedge fund Ayanda Capital at the height of the first wave of the coronavirus pandemic.

The High Court was told a VIP lane was reserved for referrals from MPs, ministers, and senior officials, with the campaigners arguing the government “prioritised suppliers including PestFix and Ayanda because of who they knew, not what they could deliver.”

In a judgment on Wednesday, Judge Dame Finola Mary O’Farrell said the use of the VIP lane, officially known as the high priority lane, was unlawful.

However, she found both of the companies’ offers “justified priority treatment on its merits” and were “very likely” to have been awarded contracts even without the VIP lane.

“Even if PestFix and Ayanda had not been allocated to the high priority lane, nevertheless they would have been treated as priority offers because of the substantial volumes of PPE they could supply that were urgently needed,” the judge said.

The Department of Health and Social Care (DHSC) had contested the claim, telling the court it “wholeheartedly” rejected the case against it and that the VIP lane was rational and resulted in a “large number of credible offers” in an environment where PPE deals often failed within “minutes.”

O’Farrell later said DHSC’s evidence “establishes that presence on the high priority lane did not confer any advantage at the decision-making stage of the process.”

She continued: “However, what is clear is that offers that were introduced through the senior referrers received earlier consideration at the outset of the process.

“The high priority lane team was better resourced and able to respond to such offers on the same day that they arrived, in contrast to the opportunities team, where the sheer volume of offers prevented such swift consideration.”

She later said: “Timeous consideration of an offer was a material advantage in obtaining the award of a contract given the urgency of the procurement.”

Jason Coppel QC, representing the campaigners, previously argued that PestFix was referred into the VIP lane because an ex-director of the company was an “old school friend” of the father-in-law of Steve Oldfield, the chief commercial officer at the DHSC.

He also claimed Andrew Mills, a former member of the UK Board of Trade and representative for Ayanda Capital, was added to the VIP lane when he contacted a senior official at the Department for International Trade (DIT).

The judge found the DHSC had complied with the duty to give “clear and sufficient reasons” for awarding both sets of contracts and that “sufficient financial due diligence” and technical verification were carried out.

A spokesman for Hancock said: “We are delighted that the Department for Health has won this case, as the court found that the priority treatment was ‘justified’ and rightly refused to grant any rectification for the way PPE was urgently bought in the height of the crisis.

“At the time, a huge number of people were doing everything they could to get PPE to the front line as fast as possible in a national emergency.

“As the National Audit Office has confirmed, ministers had no involvement in procurement decisions or contract management.

“The department was doing the best it possibly could within the rules to respond to an unprecedented situation, and crucially, the court has rightly found that action was justified and absolutely no rectification or further action is necessary.”