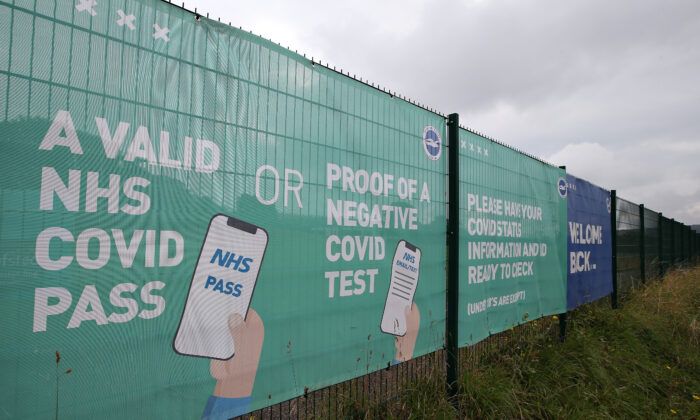 NHS COVID Pass and Negative COVID test advice is seen on a banner outside the stadium prior to the Premier League match between Brighton & Hove Albion and Watford at American Express Community Stadium in Brighton, England, on Aug. 21, 2021. (Steve Bardens/Getty Images)
UK

Prime Minister Boris Johnson has fended off the largest Tory rebellion during his premiership with the support of Labour on mandatory NHS COVID Passes for nightclubs and large venues.

Among the 320 Conservative MPs who voted on the measure, almost one-third (96) voted against it, substantially higher than was expected.

Labour is the only opposition party that supported the mandate, with 142 MPs voting for the measure and eight against.

Sir Geoffrey Clifton-Brown, treasurer of the 1922 Committee, said the prime minister must now realise that he needs to consult MPs before bringing measures to the Commons, and that some members of the party would be thinking it was time for a change.

Speaking to Sky News, he said he was “very surprised” by the size of the rebellion, adding it “shows quite a major division within the party.”

“I think now the prime minister’s really got to think very carefully about how he’s going to reset his performance, to actually govern with a united party because we will know what happens to disunited parties,” he said.

Asked whether there was now the prospect of a leadership challenge in the new year if Johnson did not change his approach, Clifton-Brown said: “I think that’s got to be on the cards. He’s got to realise that he’s got to change.”

While Labour leader Sir Keir Starmer said it was a “very significant blow to the already damaged authority of the prime minister” who he said was now “too weak to discharge the basic functions of government,” he stopped short of explicitly calling for Johnson to resign, saying: “The prime minister needs to take a long, hard look at himself and ask himself whether he has the authority to take this country through the pandemic.”

The certificate proves that an individual is either fully vaccinated, or tested negative for the CCP (Chinese Communist Party) virus in the past 48 hours, or is medically exempt from vaccination and testing.

It currently requires having received two doses of CCP virus vaccines to be considered fully vaccinated, but Health Secretary Sajid Javid has said that a booster dose will be required “once all adults have had a reasonable chance to get their booster jab.”

It’s unclear if the required number will be universal or subject to an individual’s vaccination schedule.

Other measures passed on Tuesday include the extension of mandatory mask-wearing to most indoor settings, daily testing for vaccinated contacts of those who test positive for the CCP virus, and CCP vaccination as a condition of deployment for all health workers.