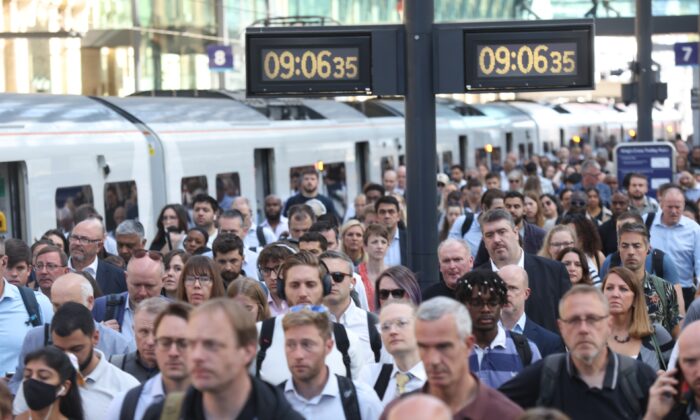 The British government has vowed to “hold the line” against rail unions’ demand for higher salaries, as passengers continue to suffer from the chaos caused by strike action.

Some 40,000 members of the Rail, Maritime, and Transport Workers’ union (RMT) walked out on Tuesday after rail operators refused to agree to the union’s demands including a 7 percent pay rise.

More walkouts have been planned for Thursday and Saturday in what union leaders have touted as the “biggest rail strike in modern history.”

Talking to LBC Radio on Wednesday, Deputy Prime Minister Dominic Raab said the strikes were “deeply regrettable” and the government had to “hold the line” against the RMT’s demands.

He acknowledged that the rising cost of living “affects workers across the board,” but stressed that “spiralling public sector pay increases beyond what is responsible” would “keep inflation higher for longer and undermine pay packets for longer.”

“It is precisely to protect the wages of those on the lowest incomes that we need to hold the line,” he said.

Though there is no strike action on Wednesday, train passengers are suffering more disruptions as services started later than normal.

Just 60 percent of trains will run across the day as a whole, and some operators will wind down services slightly earlier than normal ahead of Thursday’s walkouts.

RMT General Secretary Mick Lynch said the turnout at picket lines on Tuesday was “fantastic” and had exceeded expectations.

“Our members will continue the campaign and have shown outstanding unity in the pursuit of a settlement to this dispute,” he said.

But the Department for Transport said the strike’s impact was less than the union leaders had hoped for.

A spokesperson said: “Unions have shut down big parts of the rail network, hitting local businesses and unfairly cutting people off from hospitals, schools, and work.

“However, early data shows that unlike in the past, many people now have the opportunity to work from home, so we haven’t even a rush to the roads, as traffic has instead gone online, which means the unions aren’t having the overall impact they might have hoped.”

The union has been asked by Network Rail to attend formal consultation talks next month on introducing “modern working practices.”

He added, “We expect this will reduce roles by around 1,800, the vast majority of which will be lost through voluntary severance and natural wastage.”