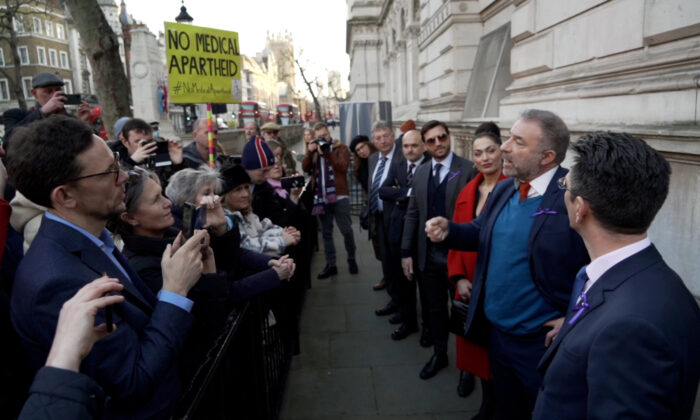 The UK government has been urged to scrap its measures against COVID-19 including vaccine mandates for frontline health care workers and COVID Passes for nightclubs and large events.

Campaigners delivered two petitions with a total of around 360,000 signatures to Number 10 on Monday afternoon—a “Together” Declaration opposing vaccine passports and any similar form of medical certification, and a separate petition demanding a reversal of the CCP (Chinese Communist Party) virus vaccine mandate for frontline health care workers.

Writing on Twitter on Tuesday, campaign group Together called on Health Secretary Sajid Javid to end all CCP virus restrictions by Jan. 26, when ministers are due to review the rules.

MPs, NHS workers, and broadcasters were among the group outside Prime Minister Boris Johnson’s office on Monday afternoon in support of the campaign.

CCP virus vaccination has been made a condition of employment in care homes in England since November 2021. The same rule will come into effect on April 1 for NHS and other health care workers, meaning unvaccinated frontline health care workers will face redeployment or dismissal.

The vaccine mandate “breaks the cornerstone of medical ethics which is informed consent [and] bodily autonomy,” Malik told NTD, an affiliate of The Epoch Times. “And as a doctor who’s been consenting for decades, I’m actually aghast that they’re contemplating such a move.”

Malik lambasted the mandate as the kind of behavior that he would expect from a totalitarian and authoritarian state, rather than from “the beacon in the West” that is the United Kingdom.

Steve James, a consultant anesthetist at King’s College Hospital who confronted Javid with his scepticism about the mandate on Jan. 7, told NTD that he had “seen the benefit” of the CCP virus vaccines from the number of intensive care unit patients, but “personal choices matter.”

“We’ve worked through the pandemic. I’ve seen COVID. I’ve seen the damage it can do to people. But for their own personal reasons [some health care workers] have chosen not to have the vaccine. And they’ve weighed up the risks with the benefit,” he said.

James previously implied during an interview with Unherd that he would prefer to wait for a few years for more safety data on the vaccines, which currently don’t offer any “potential reward of anything [he’s] interested in,” citing a previous COVID-19 infection and his lack of co-morbidity, and added that to him, “the risk [of taking the vaccines] is very small of a serious event.” He said he knew of “three young, relatively healthy” patients at his hospital who died post-vaccination and two people in his professional and social circle who had myocarditis and pericarditis.

Under the UK’s Vaccine Damage Payment Scheme, only those who suffer “severe disablement” (60 percent or more) or death are eligible for compensation.

James told NTD that he’s worried about “a huge hole in the ability of the NHS to deliver care” if the mandate goes ahead.

Broadcaster Richard Taylor said he believes the mandate is “completely wrong” and “disproportionate” especially at a time when the government has proposed a tax increase to fund the NHS, which Chancellor of the Exchequer Rishi Sunak said was “facing an unprecedented level of backlogs” due to the pandemic.

In an email to The Epoch Times, a Department of Health and Social Care spokesperson said: “NHS and care staff do amazing work and we are thankful to those who have chosen to get the vaccine.

“Health and social care workers are responsible for looking after some of the most vulnerable people in society, many of whom are more likely to suffer serious health consequences if exposed to the virus.

“This is all about patient safety, and ensuring people in hospital or care have as much protection as possible.”

The DHSC didn’t answer The Epoch Times’ query regarding how many injury claims have been made and settled.

More than 201,000 people signed the petition calling for an end to vaccine passports and similar schemes.

The UK government previously shelved the plan to mandate vaccine passports in England. But since December last year, NHS COVID Passes were introduced as a condition for entry in England’s nightclubs and large events in a bid to control the Omicron variant.

The pass can be used to prove full vaccination status and negative test results, but not natural immunity from previous infections.

Steve Baker, one of the Conservative MPs who led the opposition to the government’s restrictions, said he believes Parliament will no longer back such policies.

“There is a time to get on and live our lives and get back to the joy of relationships with our families, which incredibly was taken away,” the deputy chair of the COVID Recovery Group told NTD.

“I think Conservative MPs overwhelmingly would like these measures to end. We saw the size of the rebellion on COVID status certification. And I think that that was really the last time they’ll be able to ask for a measure like that,” he said, adding that many MPs had “voted with the government with great misgivings.”

A record number of Tory MPs voted against the government in the introduction of COVID Passes, which passed in Parliament with the help of Labour.

Buxton accused media outlets of “wiping [part of the truth] under the carpet” as she expressed her disappointment over the lack of coverage on the unintended consequences of lockdowns, such as children who “were so lost during these lockdowns that they killed themselves.”

On Tuesday, Javid defended the government’s policy and said he’s “cautiously optimistic” that the government can “substantially reduce” restrictions.

“That is why we are the most open country in Europe,” he said, adding that the restrictions shouldn’t stay in place “a day longer than absolutely necessary.”

“Due to these pharmaceutical defences and the likelihood that we have already reached the peak of the case numbers of hospitalisations, I am cautiously optimistic that we will be able to substantially reduce restrictions next week,” he said.