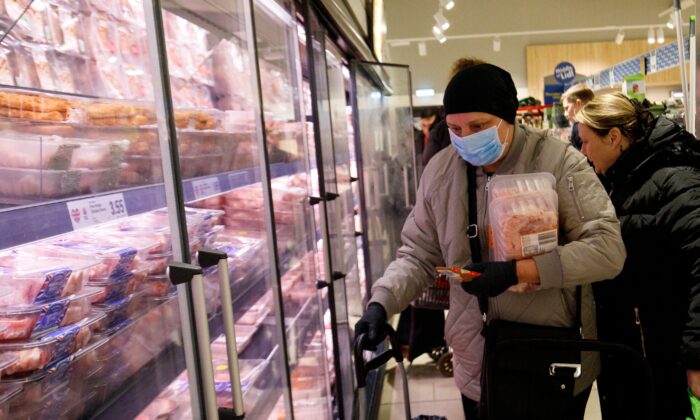 People shop in the meat aisle in a Lidl supermarket in Walthamstow, east London, on March 20, 2020. (Tolga Akmen/AFP via Getty Images)
UK

The British government will pay millions of pounds to an American company in the coming weeks in order to ensure CO2 supplies, which are indispensable to the food industry.

Business Secretary Kwasi Kwarteng announced on Tuesday that the government would provide “limited financial support” to CF Fertilisers, which produces around 60 percent of the UK’s supplies of carbon dioxide, used primarily by the food sector but also in the health and nuclear industries.

CO2 is used to stun animals before slaughter, in the vacuum packing of food products to extend their shelf life, and to put the fizz into beer, cider, and soft drinks. CO2’s solid form is dry ice, which is used in food deliveries.

Spiralling energy costs have led to the suspension of operations at fertiliser plants including CF Fertilisers, which has suspended operations at its Teesside and Cheshire plants, leading to serious shortages in CO2 supplies.

Under the deal, the government will pay towards the operating costs of CF Fertilisers for three weeks, so that the firm can restart CO2 production in its plant in Teesside.

The cost to the British taxpayer will possibly run into tens of millions of pounds, Environment Secretary George Eustice told Sky News on Wednesday.

But Eustice said the government had to act in order to protect food supplies.

“The truth is if we did not act then, by this weekend, or certainly by the early part of next week, some of the poultry processing plants would need to close and then we would have animal welfare issues,” he said, “because you would have lots of chickens on farms that couldn’t be slaughtered on time and would have to be euthanised on farms, we would have a similar situation with pigs.”

Eustice said the food industry recognises that the price of CO2 is going to “increase substantially.”

“And when that price increases then the market signal will be there for these plants to continue producing,” he told BBC Radio 4’s Today programme.

Talking to MPs on Wednesday, Kwarteng emphasised that the financial support would be “a very short-term arrangement” to solve the “immediate problem.”

He said the temporary solution means “there won’t be many noticeable shortages on the shelves.” But he warned that the supply chain remains fragile.