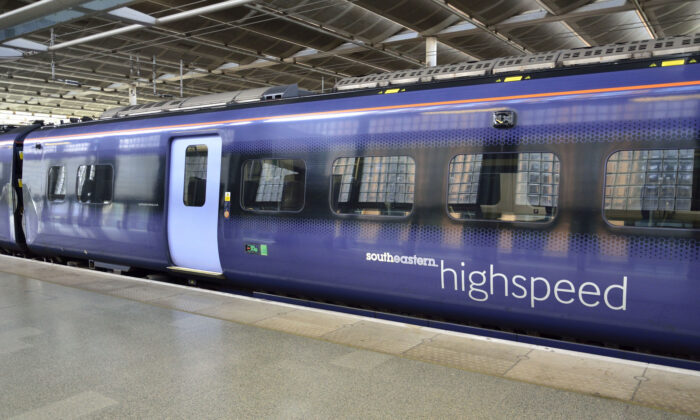 A Southeastern train in an undated handout photo, which has become the first train service in the UK to use data on passenger weight to enable better social distancing. (Southeastern/PA)
UK

The UK Government is to take over running services on train operator Southeastern, also known as the London & South Eastern Railway Limited (LSER), after a “serious breach” of its franchise agreement.

Transport Secretary Grant Shapps said an investigation by his department identified evidence that since October 2014 the company has not declared more than £25 million ($34.2 million) of historic taxpayer funding which should have been returned.

Further investigations are being conducted and the government said it will consider options for more action, including financial penalties.

Shapps said: “There is clear, compelling, and serious evidence that LSER have breached the trust that is absolutely fundamental to the success of our railways. When trust is broken, we will act decisively.

“The decision to take control of services makes unequivocally clear that we will not accept anything less from the private sector than a total commitment to their passengers and absolute transparency with taxpayer support.

“Under the new operator, we will prioritise the punctual, reliable services passengers deserve, rebuild trust in this network, and the delivery of the reforms set out in our Plan for Rail—to build a modern railway that meets the needs of a nation.”

Manuel Cortes, general secretary of the Transport Salaried Staffs Association said: “The days of rail franchising must now be well and truly over. Time and time again we see the private sector fail and taxpayers ride to the rescue.

“We need the government to dump the failed franchise system, end the profiteering of the train operating companies and take over the whole thing, lock stock, and rails.”

Rail, Maritime, and Transport union general secretary Mick Lynch said: “This latest public sector rescue of a privately operated rail service should kill off the risky and expensive nonsense of rail privatisation once and for all.”

A Southeastern Highspeed Javelin train passes through Dover in Kent, England, on April 26, 2019. (Gareth Fuller/PA)The government will take over running services on Southeastern from Oct. 17, saying a serious breach of the franchise agreement’s “good faith” obligation in relation to financial matters was identified.

Ministers stressed the announcement will have no impact on frontline staff, who they said have been at the frontline of delivering services throughout the COVID-19 pandemic.

“The decision is no reflection on their professionalism and dedication and will not affect jobs,” said the Department for Transport.

A brief statement on Southeastern’s website said: “Our passengers will see no change in our day-to-day operations.

“All tickets will remain valid after transfer and new tickets can continue to be purchased in the usual way.”

Southeastern has been running the train service between London and Kent and parts of East Sussex since 2006, operating one of the busiest networks in the country including the UK’s first domestic high-speed service with Javelin trains.

Southeastern is operated by Govia, a joint venture between transport operators Go-Ahead (65 percent) and Keolis (35 percent).

Shares in Go-Ahead, which are listed on the London Stock Exchange, plunged more than 13 percent in early trading.

The company employs 4,000 workers and runs more than 2,000 services on weekdays.

Southeastern’s latest contract started in April 2020, running until Oct. 16, with the option to extend at the Department for Transport’s discretion until March 2022.

During the course of the contract term, Southeastern said it would deliver a range of “customer experience improvements” including exploring options to boost capacity as additional rolling stock becomes available.

Go-Ahead Group’s chairwoman Clare Hollingsworth said: “It has always been this group’s intention to provide the best possible public transport, and to work in partnership with the government and related agencies.

“We recognise that mistakes have been made and we sincerely apologise to the DfT. We are working constructively with the DfT towards a settlement of this matter.”

The group said the release of its results for the year ended July 3, 2021, scheduled for Sept. 30, has been postponed.

The group also announced that Elodie Brian has resigned as group chief financial officer and will be standing down from the board with immediate effect.