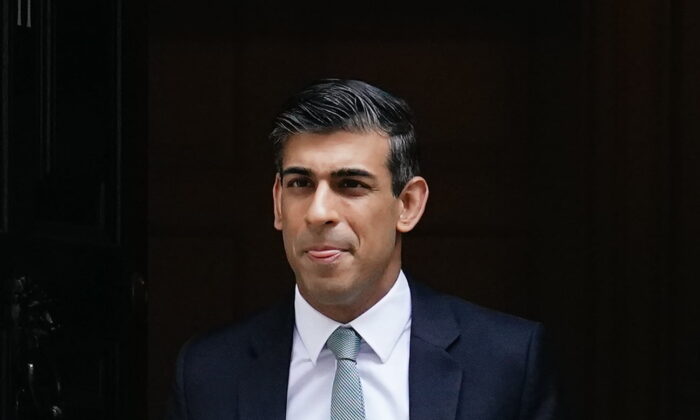 Chancellor of the Exchequer Rishi Sunak leaves 11 Downing Street as he heads to the House of Commons to deliver his Spring Statement in London on March 23, 2022. (Aaron Chown/PA)
UK

The UK government has resisted a new wave of calls to impose more tax on oil and gas companies to help deal with the cost of living crisis.

Without ruling out the idea, a Treasury spokesperson said on Thursday that it could deter “billions worth of investment,” and compromise the UK’s energy and job security.

“A windfall tax could deter billions worth of investment, which would risk both security of our energy supply, as well as almost 200,000 jobs that rely on the industry,” the spokesperson said in a statement.

“Oil and gas companies in the North Sea are already subject to a tax rate on their profits that is more than double those paid by other businesses. To date, the sector has contributed more than £375 billion [$464 billion] in production taxes,” the spokesperson added.

Energy prices in Britain have hit record highs this year leading to repeated calls from the opposition parties for a one-off windfall tax to help pay for support for people struggling with energy bills.

Labour called for the levy to be imposed on North Sea oil and gas producers, with a lawmaker from the Scottish National Party proposing to tax “companies which are benefitting from significantly increased profits as a result of impacts associated with the COVID-19 pandemic or the current international situation.” Most opposition parties supported the call.

Labour and Liberal Democrats have renewed their push to tax North Sea oil and gas producers, which would add another 10 percent to the corporation tax on the companies’ profit on top of the 40 percent they have been paying. The call continued on Wednesday and Thursday as BP and Shell posted better-than-expected underlying earnings.

Starmer also rejected the government’s argument that the tax would deter investment, saying, “A windfall tax only hits those profits that the oil and gas companies didn’t expect to make, and therefore it doesn’t affect their other investments.”

BP said on Tuesday it expected to pay up to £1 billion ($1.25 billion) in taxes in Britain on its 2022 profits after its operating profit surged despite reporting a large writedown for exiting its Russian businesses.

The company said it planned to invest up to £18 billion ($22 billion) in Britain until 2030 on producing oil and gas, wind power, an electric car charging network, and other projects.

Asked what investment BP would cancel if was hit with a windfall tax, CEO Bernard Looney told The Times of London on Wednesday, “There are none that we wouldn’t do,” adding, “We’re doing these because we are backing Britain.”

But in a separate interview, he stressed that BP shareholders who are rewarded by the profits are “not some faceless institutions.”

“Pretty much anyone who has a pension or pays into a pension in the UK is affected by that,” he said.

Ben van Beurden, chief executive of Shell, said: “The war in Ukraine is first and foremost a human tragedy, but it has also caused significant disruption to global energy markets and has shown that secure, reliable, and affordable energy simply cannot be taken for granted.

“The impacts of this uncertainty and the higher cost that comes with it are being felt far and wide,” he added.

“We have been engaging with governments, our customers, and suppliers to work through the challenging implications and provide support and solutions where we can.”

Shell on Thursday posted a better-than-expected first quarter profit haul of £7.2 billion ($9.1 billion) despite the cost of pulling out of Russian oil and gas activities.