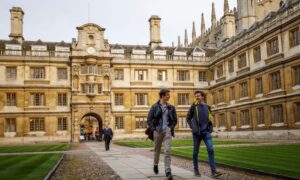 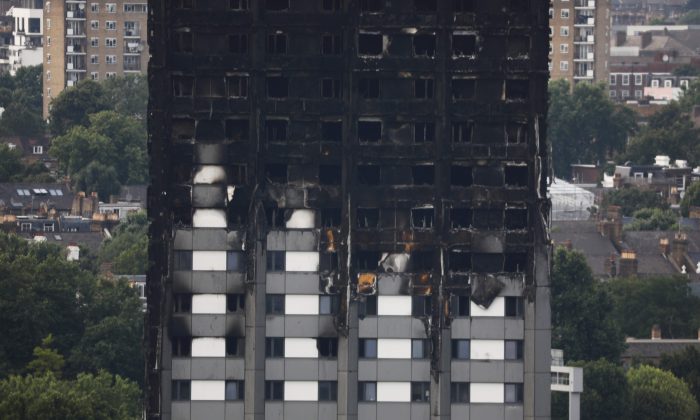 Unburned lower floors with untouched cladding in place are seen with the burnt out upper floors of the Grenfell Tower block in North Kensington, west London, on June 18, 2017. (Tolga Akmen/AFP/Getty Images)
UK

The UK government unveiled a new £3.5 billion fund in the House of Commons on Wednesday to help leaseholders strip potentially dangerous cladding from their buildings.

The plans announced by Secretary of State for Housing, Robert Jenrick, will see a mixture of grants and loans issued to those affected in a bid to remove cladding from buildings around the UK that has been identified as being a fire risk in the wake of the Grenfell Tower fire in 2017.

Speaking in the Commons, Jenrick stated that the government was “committed to bringing about the biggest change in building safety for a generation.”

The new measures are in addition to the £1.6 billion safety fund that can currently be applied for by leaseholders within England.

The announcement, however, came under fire from Shadow Secretary of State for Housing John Healy, who bemoaned the length of time it has taken for the government to propose its measures.

“I never thought I would be standing here two and a half years later facing a Secretary of State, the third Secretary of State who still cannot say that all the necessary action has been taken and that a fire like Grenfell cannot happen again in Britain,” Healy said.

The cladding that carries the most risk is called ACM cladding or “aluminium composite cladding.” According to the government, 462 buildings have been identified in England as being at risk with a further 1,700 buildings with non-ACM cladding being classified as at risk. However, a report by the Association of Managing Agents suggests that 274,000 flats have dangerous cladding affecting more than 650,000 people.

The Grenfell Tower fire happened on June 14, 2017, killing  72 people and injuring more than 70 others. It was the UK’s worst residential fire since the World War II, and the rapid spread of the fire, which saw it engulf the 24-storey building, was largely blamed on cladding used on the exterior of the building.