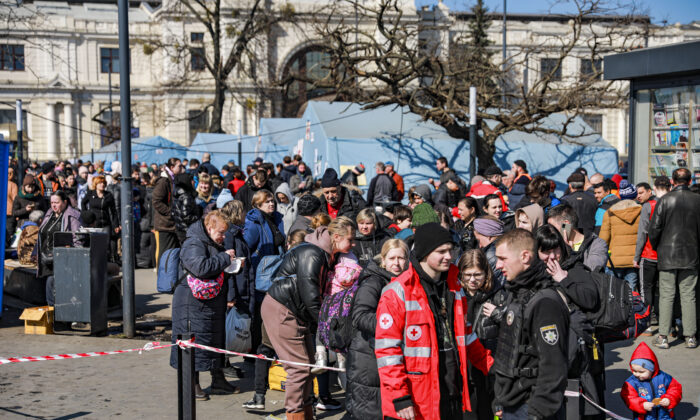 UK Government May Be Sued Over Delays for Ukrainian Refugees

The British government, in the shape of the Home Office, is facing a lawsuit over bureaucratic delays to arranging visas for refugees from the conflict in Ukraine.

In March the Homes for Ukraine scheme was launched by the government, which promised to take in thousands of Ukrainian refugees, who would be housed with British families who would be paid £350 a month.

But at least 800 Ukrainian refugees in Poland, Slovakia, and Romania are still waiting for their visas to be processed by the Home Office and a number of British sponsors who had offered their homes have threatened to bring a class action lawsuit for the “inordinate and unreasonable delays.”

Prime Minister Boris Johnson, interviewed on ITV’s “Good Morning Britain” programme, said: “We have done a huge amount to help Ukrainian women and children in the area but we’re now seeing large numbers come to the UK. So far, 86,000 visas have been issued and 27,000 are already here and I want to say, thank you—27,000 is a lot and it’s growing fast and I want to pay tribute to all those who are helping to look after Ukrainians.”

“Could we have done it faster? Yes, perhaps we could,” he added.

Johnson said Britain had decided against offering visa-free travel to Ukrainians because some might be “pretending” to be refugees.

“It’s important to protect the system from those who might want to abuse it,” he added.

Vigil 4 Visas and Taking Action Over the Homes for Ukraine Visa Delays, the groups representing the British sponsors, said the delays had put “considerable pressure and strain” on the hosts.

Amanda Jones, an immigration lawyer who is representing the group, said one refugee, who had been offered a home by Rebecca Lewis, a 44-year-old teacher from Marlow, Buckinghamshire, was made to wait until the Home Office granted visas to her children, who are aged 4 and 5.

A UK government spokesman said: “In response to [Russian President Vladimir] Putin’s barbaric invasion we launched one of the fastest and biggest visa schemes in UK history. Over 86,000 visas have been issued so Ukrainians can live and work in the UK.

“The changes the Home Office has made to streamline the visa system, including simplifying the forms and boosting staff numbers, are working and we are now processing visas as quickly as they come in—enabling thousands more Ukrainians to come through our uncapped routes,” he added.