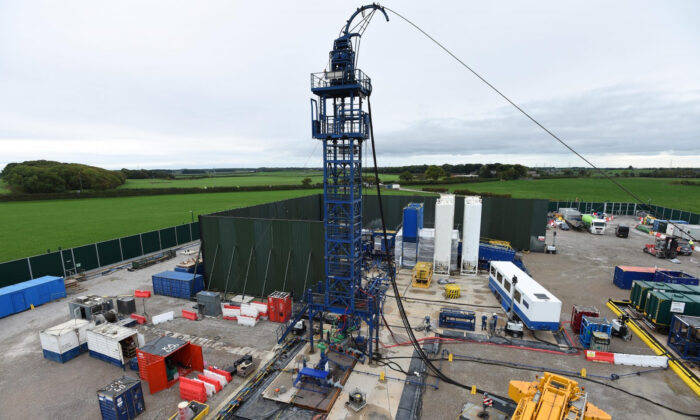 Ed Miliband calls it a 'Charter for Earthquakes'
By Chris Summers

The government has lifted the ban on fracking in England, despite the publication of a report (pdf) by the British Geological Survey (BGS) which was “inconclusive” and said more data was needed.

Fracking, or hydraulic fracturing, is a process in which high-pressure liquid is fired at shale formations to release gas.

The 2019 Conservative manifesto promised not to lift the moratorium on fracking in England unless “the science shows categorically it can be done safely.”

But on Thursday Business and Energy Secretary Jacob Rees-Mogg said it was right to lift the moratorium on fracking because the Russian invasion of Ukraine had meant Britain needed to wean itself off imported gas.

Rees-Mogg said, “In light of Putin’s illegal invasion of Ukraine and weaponisation of energy, strengthening our energy security is an absolute priority, and—as the Prime Minister said—we are going to ensure the UK is a net energy exporter by 2040.

“To get there we will need to explore all avenues available to us through solar, wind, oil, and gas production—so it’s right that we’ve lifted the pause to realise any potential sources of domestic gas,” he added.

The Department for Business, Energy & lndustrial Strategy (BEIS), had commissioned the BGS to produce a report on “the geological science of shale gas fracturing and the modelling of seismic activity in shale rocks in the UK” after a series of minor tremors caused during initial exploratory drilling in Lancashire.

The BGS report concluded: “Recent research from the USA demonstrates the importance of geomechanical modelling to identify faults that are most likely to rupture during operations. This information can be used to assess risks prior to and during operations.”

But it went on to say: “However, these models require accurate mapping of sub-surface faults, robust estimates of stress state, and knowledge of formation pore pressures and the mechanical properties of sub-surface rocks. While this information is available in a few areas, more data is needed in other basins in the UK with unconventional hydrocarbon potential to apply this more widely.”

Ed Miliband Calls It a ‘Charter for Earthquakes’

The Shadow Climate and Net Zero Secretary, Ed Miliband, wrote on Twitter: “Government wanted the BGS report to show that fracking was safe. But it didn’t. Because fracking isn’t. Now [government] admits they are willing to tolerate ‘a higher degree of risk and disturbance.’ Jacob Rees-Mogg rips up the Tory manifesto in favour of a charter for earthquakes.”

Truss has said she will not support “anything that carries a risk” but has stressed the importance of energy security.

Rees-Mogg said limits on acceptable levels of seismic activity were too restrictive and the government was determined to “realise any potential sources of domestic gas.”

Fracking could now become a key issue at the next general election, which could take place as early as next year, with the opposition Labour Party supporting the moratorium.

A statement from BEIS said, “It is clear that we need more sites drilled in order to gather better data and improve the evidence base, and we are aware that some developers are keen to assist with this process.”