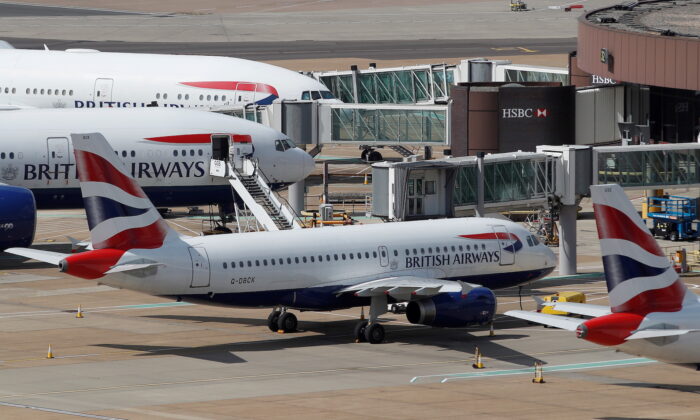 British Airways aircraft are parked at the South Terminal at Gatwick Airport, in Crawley, Britain, on Aug. 25, 2021. (Peter Nicholls/Reuters)
UK

The UK government’s unwillingness to listen to the travel industry and address staff shortages has contributed to the continuing airport disruptions, the boss of a leading airline services company has said.

The disruptions have lasted for months in the UK, resulting in thousands of flights being cancelled and many passengers being forced to wait for several hours in long queues at airports.

The aviation industry is suffering from severe staff shortages, after airlines and airports made thousands of employees redundant during the CCP (Chinese Communist Party) virus pandemic, but are now struggling to recruit new workers and have their security checks processed.

Writing in The Times of London, Philipp Joeinig, chief executive of Menzies Aviation, said the travel disruptions were not only “predictable” but also “preventable,” and accused two candidates for the Conservative Party leadership—Rishi Sunak and Grant Shapps—of having contributed to the chaos.

Joeinig said: “Brexit had a big negative impact, reducing the available pool of employees. This was compounded during the pandemic, with the British aviation sector suffering huge job losses once furlough schemes ended before the easing of travel restrictions—and with many of these people lost to the industry forever.”

He said the industry lobbied the Treasury, headed by then-Chancellor Sunak, for targeted aid to retain its skilled, security-cleared staff following the end of the government’s furlough schemes, but help was “not forthcoming,” exacerbating the current crisis.

Joeinig also called on Transport Secretary Grant Shapps to provide “practical action” to urgently address staff shortages, saying the government “should allow the sector time to recruit beyond the UK by adding aviation workers to the shortage occupation list.”

“We also need a reduction in reference checks and a fast-track process introduced without delay, with mutual recognition by authorities of security training and employee background records,” he said.

Both Sunak and Shapps have put their names forward as candidates to replace Boris Johnson as prime minister.

A Department for Transport spokeswoman said: “It is false to claim there has been inaction from government in regards to airport disruption.

“We have launched a 22-point plan to help ensure passengers don’t face a summer of disruption, including a one-off amnesty on airport slots rules, and halving processing times for counter-terrorist checks.

“It’s now on airlines to commit to running the flights they’ve promised.”