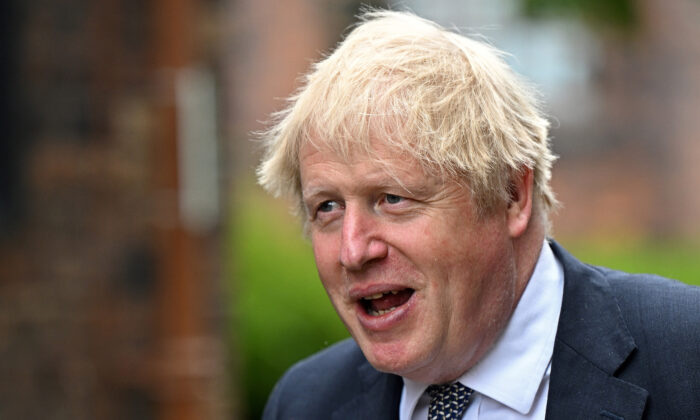 UK Government Has ‘Got To’ Fix Northern Ireland Protocol: Johnson

The UK’s Prime Minister Boris Johnson said the Northern Ireland Protocol has “got to” be fixed as the post-Brexit deadlock continues between the UK and the European Union.

During a phone call, Truss gave a fresh warning of acting unilaterally unless the EU shows “requisite flexibility” on the protocol, according to the British Foreign Office.

But Sefcovic said it was “simply not acceptable” for the UK to threaten to unilaterally suspend parts of the protocol.

The Northern Ireland Protocol is part of the UK’s Brexit deal that leaves Northern Ireland in the EU’s single market and customs union, but also effectively creates a sea border for goods and services between the region and the rest of the UK. The protocol was created to avoid a visible land border between Northern Ireland and the Republic of Ireland, which is in the EU. A hard border could risk resurrecting sectarian violence between Irish nationalists and unionists.

The Northern Ireland Executive, the region’s government, collapsed in February after the Democratic Unionist Party’s (DUP’s) first minister resigned in protest over the protocol. Following a new election on May 5, the party has refused to participate in forming a new executive until the UK government acts on altering the post-Brexit trade agreement. It may also refuse to nominate a speaker for the Northern Ireland Assembly, the region’s Parliament. The assembly cannot sit without a speaker.

Under the 1998 Good Friday Agreement, the nationalist Sinn Féin—the biggest winner in the recent election—cannot form a government without the unionist DUP, which came second in the election.

Asked if he believed the text of the Northern Ireland Protocol needed to be changed, Johnson said Northern Ireland is “an incredible place” which has “a fantastic future,” but “at the moment, very sadly, the institutions of democracy, the political governance of Northern Ireland, has collapsed.”

The prime minister said it’s a “real, real problem,” adding the reason for the problem is that “there’s one community in Northern Ireland that won’t accept the way the protocol works at present.”

Earlier on Thursday, a Foreign Office spokesman said the foreign secretary had made clear the UK’s “overriding priority is to protect peace and stability in Northern Ireland” in her phone call with Sefcovic.

Truss said that the protocol was “the greatest obstacle” to forming a new Northern Ireland Executive, the spokesman said, adding: “The foreign secretary noted this with regret and said the situation in Northern Ireland is a matter of internal peace and security for the United Kingdom, and if the EU would not show the requisite flexibility to help solve those issues, then as a responsible government we would have no choice but to act.”

In a statement following the phone call, Sefcovic said, “It continues to be of serious concern that the UK government intends to embark on the path of unilateral action.”

He said the UK had suggested Truss could suspend parts of the protocol, despite the EU putting forward proposals that “would substantially improve the way the protocol is implemented.”

“I am convinced that only joint solutions will work. Unilateral action, effectively disapplying an international agreement such as the protocol, is simply not acceptable,” he said.

“This would undermine trust between the EU and UK as well as compromise our ultimate objective—to protect the Good Friday (Belfast) Agreement in all its dimensions, while ensuring legal certainty and predictability for the people and businesses in Northern Ireland.

“Such unilateral action will also undermine the conditions which are essential for Northern Ireland to continue to have access to the EU single market for goods,” Sefcovic said.

According to The Times of London, Attorney General Suella Braverman has issued legal advice that the UK could act because the EU’s implementation of the agreement was “disproportionate and unreasonable.”

Ministers have said they could trigger Article 16 of the protocol—which allows either side to suspend some of the arrangements—while it has also been reported that they could bring in emergency legislation.

Irish Foreign Minister Simon Coveney rejected the suggestion that the EU has refused to compromise, pointing to proposals from Brussels which he said will significantly reduce some checks in the Irish Sea.

He added that the majority of the newly-elected lawmakers in Northern Ireland “want to see the protocol work.”

“There is a way forward, there is a landing ground,” he told Irish media.

He said the EU wants to focus on “compromise, flexibility, partnership,” but warned the bloc “can’t ignore” it if the UK “undermines a protocol that is about protecting the integrity of the EU single market.”