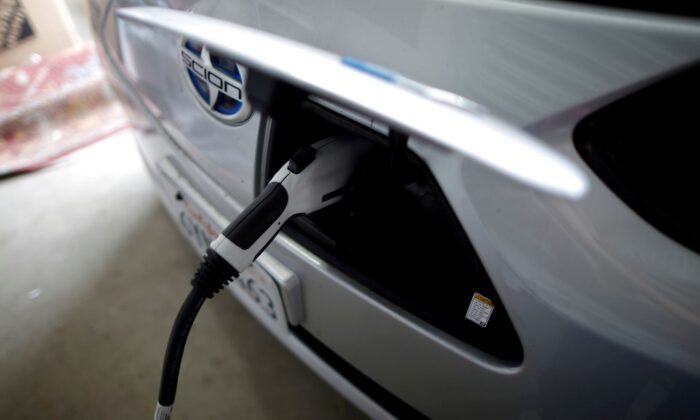 Computer science professor's electric car is plugged in in her garage in Irvine, Calif., on Jan. 26, 2015. (Lucy Nicholson/Reuters)
UK

Grants for new electric cars have been slashed by 40 percent to “enable taxpayers’ money to go further” the Department for Transport (DfT) has announced.

For cars to be eligible for the grant they must now cost less than £32,000.

The changes sparked an angry response from the automotive industry, but the DfT said they will allow “the scheme’s funding to go further and to help more people make the switch to an EV (electric vehicle).”

It added that the government’s investment in the transition to EVs “remains unchanged.”

The purchase of more than half a million low-emission vehicles has been supported by the plug-in grant scheme over the last decade.

Sales of zero-emission new cars are up 89 percent this year compared with 2020, and in the last three months, nearly a quarter of new cars sold had a plug.

The DfT also announced that it will introduce new rules next year aimed at increasing confidence in charging infrastructure.

A minimum standard for payment—such as contactless—will be required for new 7.1 kW and above charge points, and motorists will soon be able to compare costs across charging networks in a “recognisable format” similar to pence per litre at petrol stations.

Transport minister Trudy Harrison said: “The market is charging ahead in the switch to electric vehicles.

“This, together with the increasing choice of new vehicles and growing demand from customers, means that we are re-focusing our vehicle grants on the more affordable vehicles and reducing grant rates to allow more people to benefit, and enable taxpayers’ money to go further.

“We want as many people as possible to be able to make the switch to an electric vehicle, which is why we will also be introducing new rules to make it easier to find and pay at charge points.

“This will ensure drivers have confidence in our charging infrastructure, as we look to reduce our carbon emissions, create green jobs, and level up right across the UK.”

Sales of new petrol and diesel cars and vans in the UK will be banned from 2030.

Mike Hawes, chief executive of the Society of Motor Manufacturers and Traders (SMMT), said: “Slashing the grants for electric vehicles once again is a blow to customers looking to make the switch and couldn’t come at a worse time, with inflation at a 10-year high and pandemic-related economic uncertainty looming large.”

He added that other countries are “doubling down on incentives,” while UK drivers “risk being left behind on the transition to zero-emission motoring.”

Jim Holder, editorial director of magazine and website What Car? accused the government of “sending out mixed messages.”

“It wants to promote environmentally-friendly transport, yet it is reducing the incentive to do so at a time when electric cars are still more expensive to buy and represent a minority in the new car market,” he said.

“While subsidising wealthier private buyers and business fleets to electrify may be controversial at a time the nation’s finances are stretched, the rapidly-growing uptake among buyers to around 10 percent of the market shows that the policy has been working, creating a wave of advocates and building the foundations of a strong used car market in time.”

RAC head of roads policy Nicholas Lyes said the “disappointing cut” means that only around 20 EV models are now eligible for the grant.

That “doesn’t leave a great deal of choice for consumers,” he added.

AA president Edmund King said many drivers and companies will be “recalculating today to see if they can still afford their chosen EV.”

“With ambitious targets heading into 2030 it seems counterintuitive to reduce incentives, although we accept that those purchasing the lower value EVs probably have greater need for assistance.”