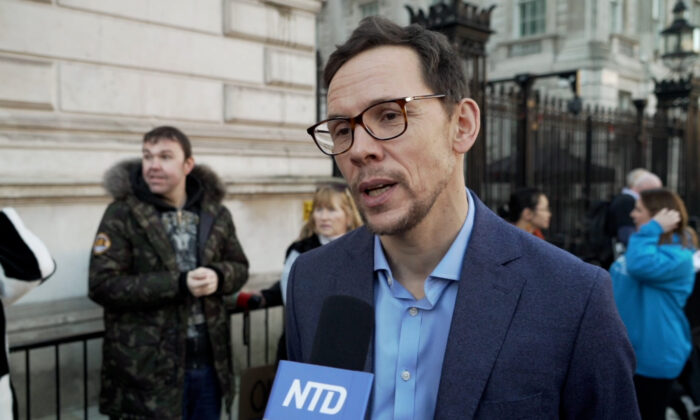 Steve James, consultant anesthetist at the King’s College Hospital, speaks to NTD outside No. 10, Downing Street, in London on Jan. 17, 2022. (Earl Rhodes/NTD)
UK

A legal challenge has been launched in England on Friday against the incoming vaccine mandate for health care workers.

The challenge, supported by campaign group “Together,” comes days before the deadline by which health care workers have to get their first doses of CCP (Chinese Communist Party) virus vaccines to avoid being redeployed, or more likely, sacked, due to limited redeployment opportunities.

Lawyers representing seven NHS staff members and a dental student have sent a letter before action to the government.

The claimants argued that the mandate is unlawful as it’s coercive, unethical, discriminatory, unnecessary, and irrational.

The government is accused of breaching the “fundamental right to privacy and bodily autonomy” and attacking “the need for informed consent in respect of any medical treatment” by mandating the vaccines, and being “irrational in dismissing the importance of natural immunity.”

The claimants also labeled the mandate “an insult” to the unvaccinated NHS workers, who they say were applauded by the public in 2020, deemed safe to work until March 31, but will be “dismissed as unsafe and unwanted” from April 1.

The Department of Health and Social Care confirmed it has received the pre-action protocol letter, but said it would be inappropriate to comment further at this time.

CCP virus vaccination has been made a condition of deployment in care homes since November 2021. A similar mandate for the NHS and wider health care settings is due to take effect on April 1, meaning those in scope will have to start their vaccination course by Feb. 3 to allow the required eight-week gap between the doses.

A previous legal challenge by Together against the vaccine mandate for care home workers was rejected by the high court, which refused to grant a judicial review of the regulations, but the campaign group argued on its crowdfunding page that the arrival of the Omicron variant has been “changing the landscape completely.”

Up until Monday, the government insisted the mandate is “the right approach” and will go ahead as scheduled, amid calls for the policy to be delayed or thrown out to avoid staff loss and reports suggesting ministers were considering an 11th-hour delay.

But Javid gave a slight hint on Tuesday that the planned rule is not yet set in stone.

He told a select committee of MPs that it’s the “professional duty of every NHS worker to get vaccinated,” and that the “whole principle” of the vaccine mandate is “about patient safety.”

But he acknowledged that staff loss is part of the “cost element” that also affects patient safety.

“When we made this decision, that was the principle, and we weighed it up. The dominant variant of the time was Delta,” Javid said, adding he believes “it is right—in light of Omicron—that we reflect on all this, and keep all COVID policies … under review.”