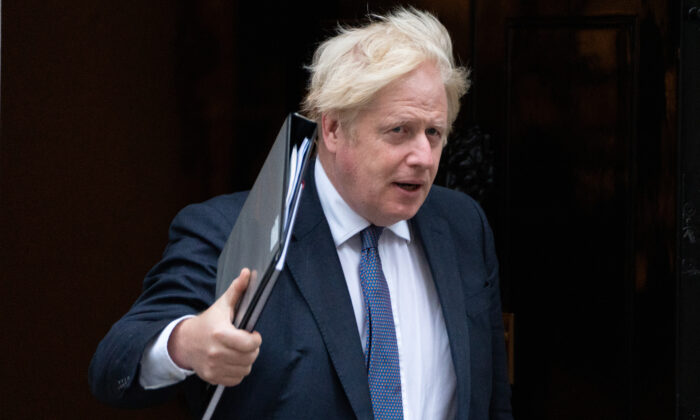 The UK government has denied new allegations of lockdown breaches after a photo emerged showing Prime Minister Boris Johnson, his wife, and staff in the Downing Street garden during the first national lockdown.

The photo, obtained by The Guardian, showed Johnson, his then-fiancee Carrie, and 17 staff members in the garden on May 15, 2020, with bottles of wine and a cheeseboard on a table in front of the prime minister.

At the time the photo was taken, outdoor gatherings were still restricted by COVID-19 regulations. Earlier that day, then-Health Secretary Matt Hancock told the daily COVID-19 briefing: “People can now spend time outdoors and exercise as often as you like—and you can meet one other person from outside your household in an outdoor, public place. But please keep two metres apart.”

On Sunday, a Number 10 spokesperson told The Guardian: “Work meetings often take place in the Downing Street garden in the summer months. On this occasion there were staff meetings after a No. 10 press conference. Downing Street is the prime minister’s home as well as his workplace. The prime minister’s wife lives in No. 10 and therefore also legitimately uses the garden.”

But the main opposition Labour Party said “serious questions” need to be answered about the leaked photo.

Labour leader Keir Starmer told Sky News, “Everybody will have looked at that photograph and to suggest that that is a work meeting is a bit of a stretch by anybody’s analysis.”

“Just look at the photo and ask yourself is that a work meeting going on or is that a social event? I think the answer is pretty obvious,” he said.

Deputy Prime Minister and Justice Secretary Dominic Raab denied the allegation, stressing that having a drink “after a long day or long week” was not against the rules.

Raab told Times Radio: “Downing Street used that garden as a place of work. They used it for work meetings. The photo is from a day when, I think, the prime minister had just done a press conference. And sometimes they’ll have a drink after a long day or a long week. And that’s not against the regulations.”

Appearing on BBC Radio 4’s “Today” programme, Raab was asked whether he believes “someone or some group” was “dripping out leaks to bring Boris Johnson down.”

Raab said: “I think it’s certainly been done with an animus but, beyond that, I couldn’t really comment. I’m against speculating on these things.”

The alleged gathering is one of a number of incidents that have been reported across Whitehall during CCP (Chinese Communist Party) virus lockdowns.

Senior civil servant Sue Gray has been tasked with investigating the reports after Cabinet Secretary Simon Case was removed from the probe after it was revealed he had known about a quiz held in his department.