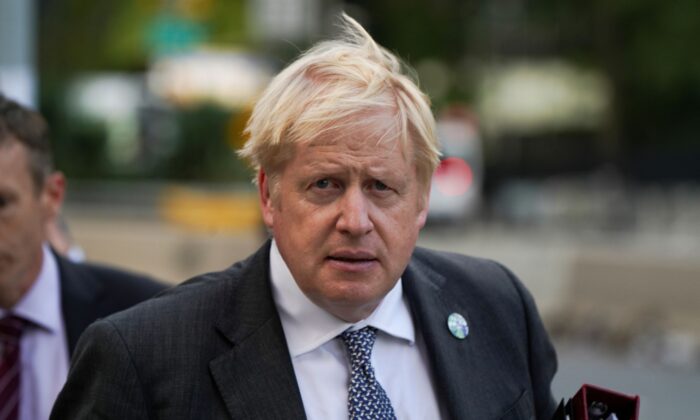 The government has been embroiled in a corruption row over the past week, with Johnson forced to abandon plans pushed through Parliament to protect one of his lawmakers who was found to have broken lobbying rules.

The Sunday Times reported that all but one of the 16 Conservative treasurers over the last two decades had donated more than 3 million pounds ($4.05 million) to the party and then been offered a seat in the House of Lords.

The role of Conservative treasurer has become the most ennobled job in Britain, the newspaper said, ahead of leaders of the country’s institutions and charitable organisations and even former prime ministers.

“They are philanthropists who give huge amounts to charity, who have been very successful in business and therefore on those grounds ought to be considered for the Lords,” he told the BBC.

Eustice also described the furore over Conservative lawmaker Owen Paterson, who quit Parliament after the government’s U-turn on plans to overhaul the system for combating parliamentary corruption, as a “storm in a teacup.”

The row has raised fresh questions about Johnson’s ethics. Both Labour and the Lib Dems urged Parliamentary Commissioner for Standards Kathryn Stone to open an investigation into whether the prime minister properly declared his free holiday at a Spanish villa owned by the family of environment minister Lord Goldsmith.

No. 10 said on Friday that Johnson had abided by the transparency requirements laid down by both the ministerial code and the code of conduct for MPs over the holiday.

Labour has also renewed calls for Stone to investigate the financing of Johnson’s luxury refurbishments to his Downing Street flat.

Earlier this year, Independent Adviser on Ministers’ Interests Christopher Geidt published a report criticising Johnson over the issue, buy cleared him of a conflict of interest or of breaching the ministerial code.

Eustice told the BBC’s “Andrew Marr Show” Geidt’s investigation has already put the issue “to bed,” and Stone shouldn’t open a new investigation since “it’s not her role to implement the ministerial code.”

The Downing Street flat was “clearly a ministerial issue, not a Member of Parliament issue,” he said.

Johnson’s personal approval rating has fallen to its lowest level on record, according to an Opinium poll for the Observer newspaper, while the Conservative’s lead over Labour has fallen to a single percentage point.

Parliament is due to hold an emergency debate on standards on Monday.

“The prime minister is trashing the reputation of our democracy and our country,” Labour leader Keir Starmer told BBC television on Sunday.

“It is a pattern of behaviour from a prime minister who doesn’t know how to uphold standards in public life.”

Robert Largan, one of the new generation of Tory MPs elected in 2019, said the Paterson debacle is “something that we got badly wrong and they need to fix it.”

Former Conservative minister Tobias Ellwood also underlined how serious the row was, telling the BBC, “we should not deny that this was a dark week for British democracy.”

He said Johnson “needs to think about his legacy and what it’s going to be,” adding, “We need to find our moral compass and get back to what the British people want us to do—good policy, good governance, leadership, statecraft.”