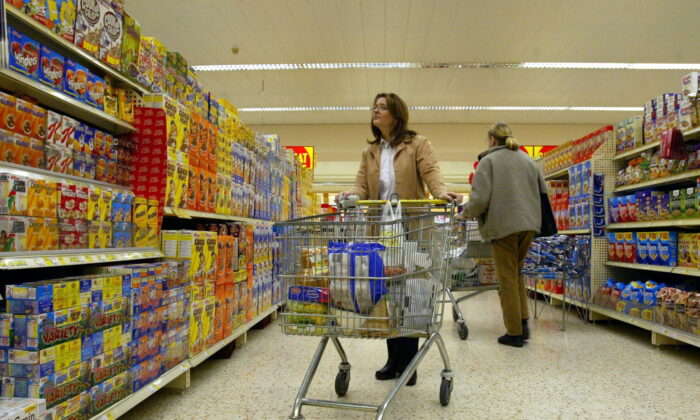 Shoppers are seen in a supermarket aisle in this file photo. (Martin Rickett/PA)
UK

A ban on multibuy deals such as buy one get one free for less healthy food will be put off for a year in light of the “unprecedented global economic situation,” the UK government said on Saturday.

Restrictions on free refills for soft drinks will also be delayed for a year.

The restrictions, aimed at curbing the promotion of food and drinks high in fat, salt, or sugar (HFSS), will come into effect in October 2023.

Citing “higher than expected global energy and goods prices” which drove up supply chain costs, the government said the delay will “allow the government to review and monitor the impact of the restrictions on the cost of living in light of an unprecedented global economic situation.”

A ban on TV adverts for HFSS food and drinks before 9 p.m. and paid-far online adverts is also delayed for a year until January 2024.

The government said it’s due to a delay in the Health and Care Bill receiving Royal assent, and to give the industry more time to prepare.

But restrictions on the placement of less healthy food will take effect as planned in October 2022, meaning they can no longer be placed in spots such as checkouts, store entrances, aisle ends, and their online equivalents.

Industry body the Food and Drink Federation (FDF) welcomed the “pragmatism” of the government’s action.

Kate Halliwell, the FDF’s chief scientific officer, said: “At a time when both families and our manufacturers are struggling with high inflation, it makes sense to delay the restrictions on volume promotions for everyday food and drink products, including breakfast cereals, ready meals, and yoghurts, as it risked further stretching already-pressed household budgets.

“We also welcome the delay to the start of advertising restrictions, given the time it will take our industry to prepare for the change in law,” she added.

Lord James Bethell, who piloted measures to bar multibuy deals before he was sacked as a health minister in last year’s reshuffle, said failure to tackle the “obesity crisis” would simply add to the costs of the National Health Service.

“I am concerned that it will blow a hole in the obesity strategy. That has a massive follow-on effect on all of our health targets,” he told the BBC Radio 4 “Today” programme.

“More people are getting cancer due to obesity-related effects. So the cancer 10-year plan, the extra five years of longevity, and many more of our health targets are damaged by this,” he added.

“All of this illness that is caused by [being] overweight from junk food is being carried by the NHS and by the taxpayer. We do need to account for all of the costs of the obesity crisis in this country.”