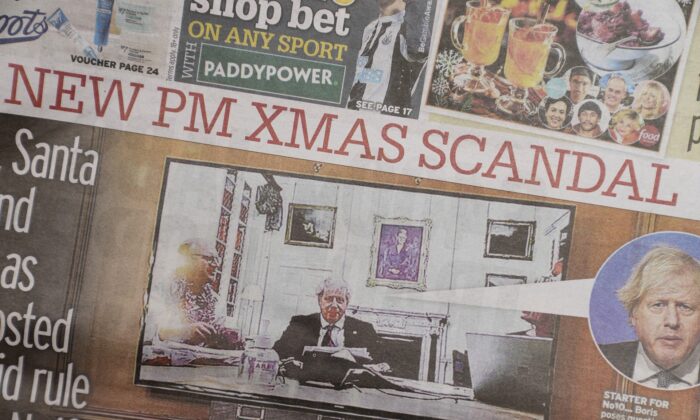 An image of Prime Minister Boris Johnson taking part in an online Downing Street quiz flanked by colleagues in the library of 10 Downing Street in London, published on the front page of the Sunday Mirror on Dec. 12, 2021. (PA)
UK

The UK government has defended Boris Johnson after a photograph emerged of the prime minister taking part in a Christmas quiz last December when London was under COVID-19 restrictions.

The Sunday Mirror published a picture of Johnson reportedly playing quiz master while flanked by two colleagues, one of whom is draped in tinsel and the other wearing a Santa hat, in the Number 10 library.

The quiz is said to have taken place on Dec. 15, 2020, when London was in tier two restrictions, meaning there could be no mixing of households indoors, apart from support bubbles. Official guidance at the time set out that there should not be work lunches or parties “where that is a primarily social activity” and was not exempted for “work purposes.”

Downing Street confirmed that Johnson did “briefly” take part in the “virtual” quiz.

A Number 10 spokeswoman said: “Downing Street staff were often required to be in the office to work on the pandemic response so those who were in the office for work may have attended virtually from their desks. The prime minister briefly took part virtually in a quiz to thank staff for their hard work throughout the year.”

The main opposition Labour Party said it was “very hard” to see how the virtual quiz was “compliant with the rules.”

Labour leader Sir Keir Starmer told the BBC that Johnson “looks as though he was” breaking CCP (Chinese Communist Party) virus rules, as “he must have known that other groups were in other rooms in his own building.”

But Education Secretary Nadhim Zahawi said Labour had adopted the “wrong” stance on the quiz.

Zahawi told Sky News: “What do we see in that picture? We see a prime minister on a virtual quiz night for 10 to 15 minutes to thank his staff, who by the way, had no choice but to come in every single day.

“Sitting in his office are the two people who are closest working with him, no alcohol on the table, not drinking, on a Zoom call or a Teams call, a virtual call respecting the lockdown rules. Many people would have had similar Zoom quiz nights around the country.”

A series of allegations about rule-breaking parties has dogged the government over recent days, including two at Downing Street which are being investigated.

It also emerged late Saturday that staff working for Work and Pensions Secretary Therese Coffey drank alcohol and ate takeaways “late into the evening” on a number of occasions while COVID-19 restrictions were in place.

The Department for Work and Pensions (DWP) has confirmed the allegations, which were first reported by the Sunday Mirror, but stressed it took place while work was continuing past normal employment hours.

A DWP spokesman said: “Throughout the pandemic, DWP officials have followed government guidance while continuing to deliver vital services for millions of people.

“Staff worked from home where possible but a core team working directly to the secretary of state regularly worked from the office, in accordance with the COVID-19 rules as they evolved.

“The team regularly worked late into the evening and on a number of occasions they ate takeaway food and drank some alcohol. No karaoke took place.”