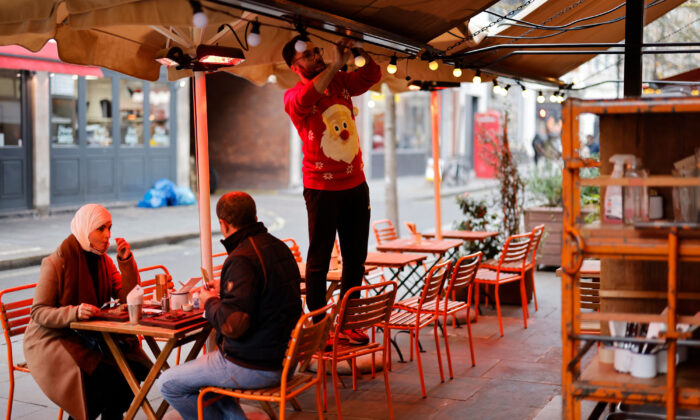 A hospitality worker wearing a Santa-themed Christmas jumper works around empty tables outside a restaurant in London on Dec. 21, 2021. (Tolga Akmen/AFP via Getty Images)
UK

A £1 billion ($1.32 billion) taxpayer-funded package has been announced in England on Tuesday to support businesses affected by the spread of the CCP virus and the government policy to curb the spread of the virus, which causes COVID-19.

With the uncertainty around the Omicron variant looming, hospitality businesses have taken another hit in the most crucial month of the year as people canceled their Christmas plans.

Industry representative UKHospitality reported on Monday that over half of the venues lost more than 40 percent in revenue last weekend, with one in five businesses reporting a sales drop of more than 60 percent.

After days of urgent lobbying from MPs, firms, and industry officials, the Treasury said on Tuesday that hospitality and leisure businesses will be eligible for one-off grants of up to £6,000 ($7,950) per premises, with an additional £100 million ($132 million) discretionary funding through the Additional Restrictions Grant (ARG) for local authorities to support other businesses.

The Statutory Sick Pay Rebate Scheme will also be reintroduced from Tuesday, covering the cost of Statutory Sick Pay for CCP (Chinese Communist Party) virus-related absences for up to 2 weeks per employee for businesses with less than 250 employees.

Another £30 million (approx. $40 million) will go to the Culture Recovery Fund to support cultural organisations in England during the winter

After the Omicron CCP virus was discovered in the UK, the government has reinstated mask mandates in most indoor settings and introduced the NHS COVID Pass as a condition of entry to nightclubs and large events in England.

Prime Minister Boris Johnson confirmed on Tuesday that no more restrictions will be imposed before Christmas due to “the continuing uncertainty” about the severity of Omicron, the hospitalisation rate, or the impact of the vaccine rollout or the boosters.”

“We don’t think today that there is enough evidence to justify any tougher measures before Christmas,” Johnson said. But the prime minister also said he “can’t rule out any further measures after Christmas.”

According to the UK government’s CCP virus dashboard, the number of cases surged to a record high a week ago, but appears to have plateaued.

The number of people in hospital with the CCP virus fluctuated slightly upward, while the number of patients in mechanical ventilation beds decreased slightly.

The number of people who died with COVID-19 on their death certificate also remained low compared to the previous waves.

Paul Hunter, Professor in Medicine at the University of East Anglia (UEA), also said the previous rapid increase in cases appears to be slowing and, if that is true, there is no need for a lockdown, which would only flatten the peak but will also “prolong the epidemic,” ultimately making no difference unless there will be “effective new treatments or vaccines.”

Current figures from South Africa also suggested that the wave of Omicron cases has been high but narrow, and the number of deaths remained a fraction of those seen in the previous waves.