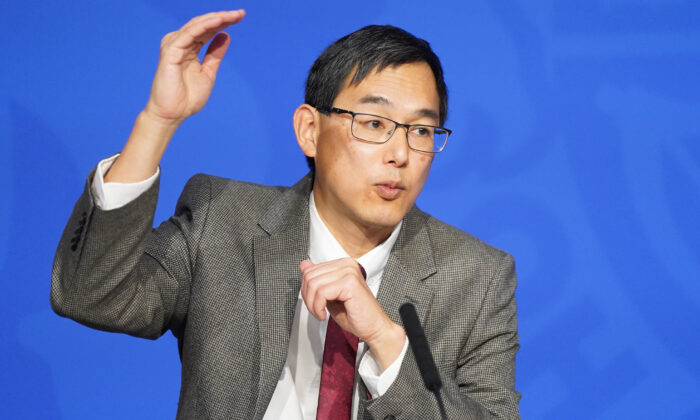 Professor Wei Shen Lim, COVID-19 immunisation chair of the Joint Committee on Vaccination and Immunisation, during a media briefing in Downing Street, London, on Nov. 29, 2021. (Stefan Rousseau/PA)
By Lily Zhou

The Joint Committee on Vaccination and Immunization (JCVI) said the three doses of the vaccines are still providing “very good protection against severe disease,” and an immediate second booster dose to the most vulnerable would “provide only limited additional benefit against severe disease at this time.”

According to data compiled by the UK Health Security Agency, for people over 65, protection against hospitalization remains at about 90 percent three months after the third dose.

The JCVI also said that there’s “limited time” for another booster to have a substantial impact within the current wave of infections thanks to the fast spreading of the Omicron variant, and that a fourth dose would add pressure to the NHS, which is currently under significant pressure partly due to staff shortages and the booster vaccine programme.

As a result, the JCVI advised the government that there was no need to offer a fourth dose, or second booster, to vulnerable people at this time. Instead, the government should focus on giving a third dose to as many people as possible to boost protection against the highly transmissible Omicron variant.

“The current data show the booster dose is continuing to provide high levels of protection against severe disease, even for the most vulnerable older age groups,” said Prof. Wei Shen Lim, the JCVI’s COVID-19 subcommittee chair. “For this reason, the committee has concluded there is no immediate need to introduce a second booster dose, though this will continue to be reviewed.’’

The JCVI’s statement also suggested that alternative vaccines, including variant-specific vaccines, may become available during 2022, and may work better against the Omicron variant or other novel variants.