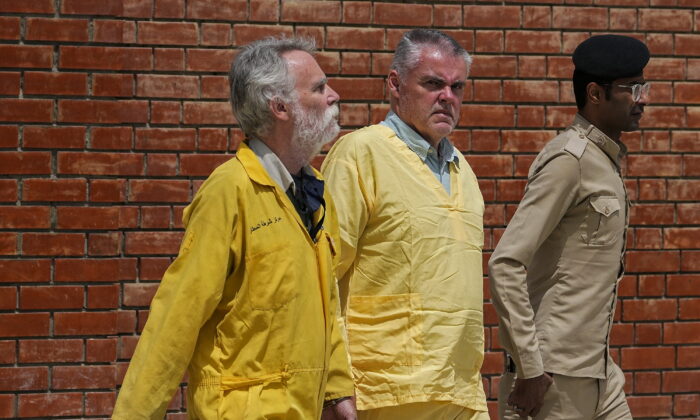 Jim Fitton of Britain (L), and Volker Waldmann of Germany (C), wearing yellow detainees’ uniforms and handcuffed, are escorted by Iraqi security forces outside a courtroom, in Baghdad on May 22, 2022. (Hadi Mizban/AP Photo)
UK

A retired British geologist who was jailed in Iraq earlier this year after being accused of taking shards of pottery from an archaeological site has thanked campaigners who helped win his freedom.

Jim Fitton, 66, was arrested in March at Baghdad Airport after security staff found items in luggage belonging to him and a German tourist, Volker Waldmann.

The pair had been on an organised geology and archaeology trip to Eridu, an ancient Sumerian city and a UNESCO heritage site in southern Iraq.

Fitton admitted to collecting stones and pieces of pottery as souvenirs but insisted he had not acted with any criminal intent.

Under Iraqi law the pair could have faced the death penalty, but Waldmann was cleared and Fitton was jailed for 15 years.

However, Fitton was released from an Iraqi prison last week following the intervention of the Foreign Office, who had been pressured by his local MP, German-born Wera Hobhouse.

Iraq has been seeking to clamp down on the pilfering of archaeological sites but Hobhouse, the Liberal Democrat MP for Bath, said, “Jim’s case really resonated with people and there was a unanimous outpouring of sympathy and support.”

She criticised ministers for a belated request for help and said the Foreign Office only went into bat for Fitton after she raised his case in Parliament.

Fitton returned to his home in Kuala Lumpur, Malaysia, at the weekend.

His daughter, Leila Fitton, said: “It was a nightmare, worse than a nightmare. I’m very close to my dad … and I was stressed every day, I couldn’t sleep and I feel like I’ve not slept for months. I can’t imagine what he went through, the amount of anxiety.”

Her husband, Sam Tasker, said: “We personally have a great many people to thank for their support during this horrific and trying time for our family, not least the 357,000 people who signed a petition on change.org, who kept us going with kind comments and words of support, the hundreds of supporters who wrote letters to their MPs asking for engagement …. We as a family will never again doubt the kindness of strangers.”

He said they also received some advice from Richard Ratcliffe, whose wife, Nazanin Zaghari-Ratcliffe, was detained in Iran for six years, before finally being released earlier this year.