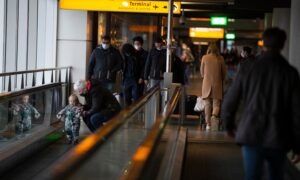 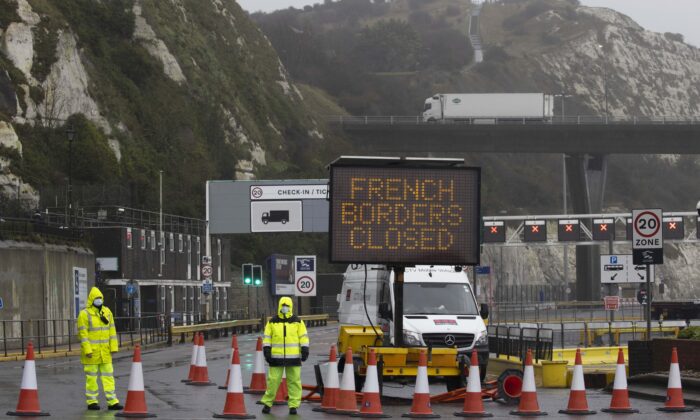 Dover Port is closed as new travel restrictions to the continent remain in place, in Dover, England, on Dec. 21, 2020. (Dan Kitwood/Getty Images)
UK

The UK will “make sure” to work with France to resolve the piling up of lorries, British Transport Minister Grant Shapps said on Monday, as European countries shut their borders to the UK after a new strain of the CCP virus was identified.

French Transport Minister Jean-Baptiste Djebbari said on Monday morning that a Europe-wide health protocol will be established within hours to ensure that movement from the UK can resume.

France suspended all travel from the UK for 48 hours from 11 p.m. on Sunday night (midnight Paris time), including travel linked to goods transported by road, air, sea, or rail.

As a result, the port of Dover has been closed to all vehicle traffic leaving the UK.

“Following the French Government’s announcement it will not accept any passengers arriving from the UK for the next 48hrs, we’re asking the public & particularly hauliers not to travel to Kent ports or other routes to France,” Shapps wrote on Twitter on Sunday night.

“We expect significant disruption in the area,” he added.

Trucks are being stacked on the M20 motorway through Kent, heading towards the ports, which is closed to normal traffic. A nearby airport will also be used to hold freight.

The closure of the Channel Tunnel and ports for onward travel to France will affect the export of goods such as fish and shellfish from Scotland to Europe. The UK’s Christmas fresh food supplies could also be disrupted as the chief executive of the Food and Drink Federation said truckers from continental Europe “will not want to travel here if they have a real fear of getting marooned.”

“What we’d do is if we don’t get a result we’re going to make sure that we work with the French to get it resolved,” he said, “not least because that’s what they’ve told me they want to do. In fact, they want to speak to me later today because they’re very keen to get the hauliers moving again.”

Prime Minister Boris Johnson is due to have an emergency COBRA (Cabinet Office Briefing Rooms) meeting on Monday to discuss solutions.

France, Germany, Italy, the Netherlands, Austria, Switzerland, Ireland, Belgium, Israel, and Canada were among those that shut off travel ties after Johnson announced that the new CCP (Chinese Communist Party) virus variant—which the chief scientific adviser said may have emerged from London or Kent in September—may be up to 70 percent more transmissible.

The World Health Organisation told the BBC that the new variant has been identified in the Netherlands, Denmark, and Australia.

Commenting on other countries’ decision to shut their borders to the UK, Shapps said that “every country has to make its own decision,” but the new variant may have already been spreading in those countries.

“We tend to be more aware of the variants faster,” Shapps told the BBC, “because we have the capacity to sequence the genome that makes up the coronavirus.”

Shapps said the figure he saw showed that the UK has been doing 45 percent of the CCP virus genome sequencing in the world.

“We’ve detected that first, but we know already that the cases have been found in continental Europe and other countries, including countries which have placed travel bans,” he said.

“In the Netherlands, for example, actually have much higher case rates per 100,000 than the UK at the moment,” he added, “so I think it stands to reason that once people look at this, they probably realise that it’s actually already in their domestic coronavirus case load.”

The latest data published on the European Centre for Disease Prevention and Control’s website shows that during the 14 days between week 49 and week 50, the UK had 348.2 CCP virus cases per 100,000 inhabitants, while the Netherlands has 546.7, but the UK has a higher death rate per 100,000. It is not clear what percentage of the cases are of the new variant in either country.