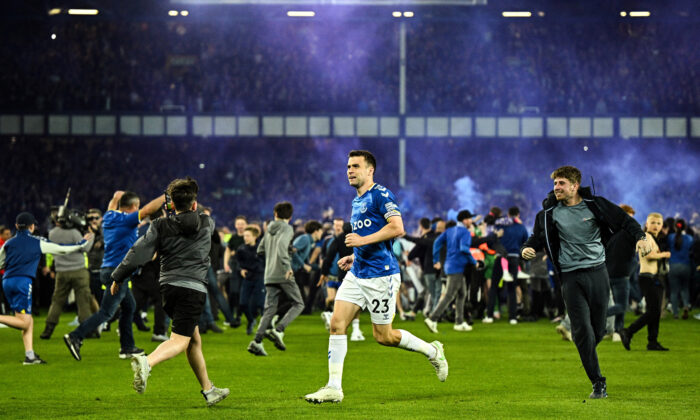 Everton's Irish defender Seamus Coleman runs off the pitch as fans invade the pitch to celebrate at the end of the English Premier League match between Everton and Crystal Palace at Goodison Park in Liverpool, on May 19, 2022. (Oli Scarff/AFP via Getty Images)
UK

UK Football Pitch Invasions Could Be Due To Post-Pandemic ‘Over-Excitedness’: Expert

Merseyside Police are investigating an incident at the end of Everton’s Premier League game with Crystal Palace on Thursday night in which the visitors’ manager, Patrick Vieira, clashed with a fan who taunted him during a pitch invasion.

The incident was the latest in a series of pitch invasions that have led to calls for action by the football authorities in England.

G. K. Still, a visiting professor of crowd science at the University of Suffolk, said the spate of pitch invasions was “alarming” and could be linked to the pandemic.

Still told The Epoch Times: “They are basically celebratory. But restrictions are being lifted and people have forgotten the rules and have become over-excited.”

He said there appeared to have been “copycat” incidents and he said a possible contributory factor may have been a shortage of trained stewards.

On May 17 Sheffield United captain Billy Sharp was headbutted by a Nottingham Forest supporter who had run onto the pitch after the team’s play-off semi-final. Two days later Robert Biggs, 30, pleaded guilty to assault occasioning actual bodily harm and was jailed for 24 weeks.

Biggs, a season ticket holder at Nottingham Forest, was also ordered to pay £500 ($624) in compensation to Sharp and was given a 10-year football banning order. Forest banned him for life.

In 1991 the Football Offences Act was passed by Parliament and it stated: “It is an offence for a person at a designated football match to go onto the playing area, or any area adjacent to the playing area to which spectators are not generally admitted, without lawful authority or lawful excuse.”

But when thousands of supporters come onto the pitch—usually in a joyful mood, celebrating promotion or victory in some other key match—it is impossible to enforce and it is usually used only as an additional offence for someone, like Biggs.

There have been other incidents this week at the Northampton v Mansfield and Port Vale v Swindon play-off matches.

Mansfield manager Nigel Clough—a former Liverpool and England player—said it was “concerning” and added: “Football from the top level have to address it. … You get enough stewards, enough security people around that people can’t encroach on the pitch. The pitch is for the 22 players and the referee and assistants when they need to come on. No one else should be on it.”

Swindon striker Harry McKirdy wrote on Instagram: “I’ll take the stick and the songs. But bottles, coins, lighters thrown at me, running on and hitting and kicking me/team-mates. Too far.”

Former England footballer and TV pundit, Gary Lineker, wrote on Twitter: “Managers and players being verbally and physically abused during pitch invasions is a worrying trend. They’re supposed to be joyous, celebratory moments. A few stupid idiots spoil it for everyone … and you’ve got to be a whole different kind of stupid to abuse Patrick Vieira.”

“Merseyside Police is investigating an altercation on the pitch at Goodison Park following the Everton v Crystal Palace match on Thursday. We are working with Everton to gather all available CCTV footage and are speaking to witnesses,” the force said in a statement.

Broadcaster Colin Murray, writing in a column for Metro, said: “The white line should be seen as a sacred, invisible barrier, but it is now ignored on a weekly basis. While the fences are, thank goodness, a thing of the past, we must assume that they are still, metaphorically, there.”

Metal fences which kept fans off the pitch were mandatory in the 1970s and 1980s as football hooliganism—sometimes dubbed “the English disease”—became endemic in stadiums in England and Wales.

But they were removed after the 1989 Hillsborough disaster, in which more than 90 Liverpool fans died after being crushed in the Leppings Lane end during an FA Cup semi final against Nottingham Forest at Sheffield Wednesday’s stadium.

Biggs, who Nottingham Forest have said will be banned for life, was also given a 10-year football banning order.

The English Premier League is not yet over and there are fears of more pitch invasions on Sunday as the season reaches its climax.

Either Liverpool or Manchester City will be crowned champions and Leeds United, coached by Wisconsin-born Jesse Marsch, or Burnley will be relegated, depending on the outcome of their final match.

Liverpool manager Jurgen Klopp said on Friday he did not want to judge Everton’s fans but he said:  “I understand emotions but for the other team it’s dangerous. I really hope we learn from that. We should make sure absolutely nothing happens. We can celebrate things without threatening ourselves and the opponent.”

Newcastle manager Eddie Howe, whose team has to go to Burnley on the final day of the season, said: “I don’t mind the celebrational aspect, embracing the success that a team has had is part of football, I’ve got no issue with that. It’s the aggression towards the opposition, it’s swarms of people around one or two people. That doesn’t sit well with me at all, that’s something we have to act [on] very quickly because we want to avert potential tragedy.”

In 2009 an Iraqi footballer was shot dead by a fan as he ran through on goal at the end of a crucial match in Hillah, near Baghdad.