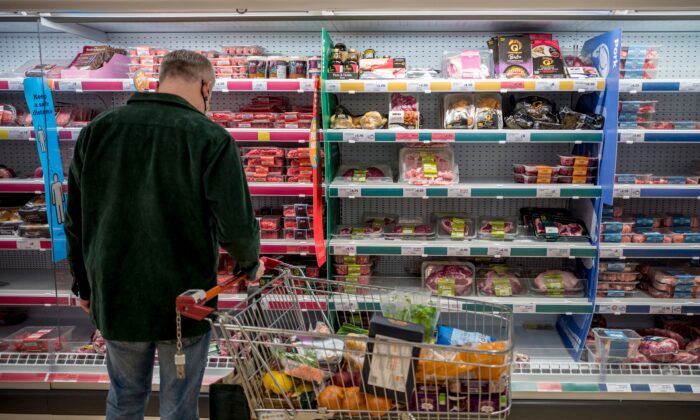 A customer shops for meat at a Sainsbury's supermarket in Walthamstow, east London, on Feb. 13, 2022. (Tolga Akmen /AFP via Getty Images)
UK

UK Food Prices Could Soar by 15 Percent Over the Summer: Report

Prices of essential food items in the UK could rise by as much as 15 percent over the summer as food inflation is set to hit its highest level in more than 20 years, according to grocery analysts.

In its latest report released on June 16, the Institute of Grocery Distribution (IGD) said that British households are set to pay more for essentials including dairy, bread, and meat.

As the UK economy is facing its strongest period of inflationary pressure since the 1970s, IGD said it expects food inflation to persist for longer than originally expected due to several factors, including the impact of the war in Ukraine, pre-existing supply chain challenges, and the limited effectiveness of monetary and fiscal policy.

Products that use grain such as bread and products containing meat from animals fed on grain, for example, chicken, are to increase in price over summer and autumn as a result, said the IGD.

IGD chief economist James Walton said the cost of living pressures are unlikely to ease in the near future, leaving many households and businesses looking to the future with “considerable anxiety.”

“We are already seeing households skipping meals, a clear indictor of food stress,” he said.

“We expect the mood of shoppers to remain bleak for the foreseeable future as they are impacted by rising inflation and a decline in real wages. Shoppers are likely to dial up money-saving tactics as far as possible,” he added.

It comes as the Bank of England, Britain’s central bank, raised its benchmark interest rate by 0.25 percentage points to 1.25 percent in an effort to rein in runaway inflation.

The ONS revealed that budget pasta prices rose 50 percent between April last year and April this year, with the cost of bread and minced beef also lifting substantially higher.

BRC chief executive Helen Dickinson said: “Fresh food inflation hit its highest rate in a decade, with items like poultry and margarine seeing some of the largest increases due to soaring costs of animal feed and near-record global food prices.”