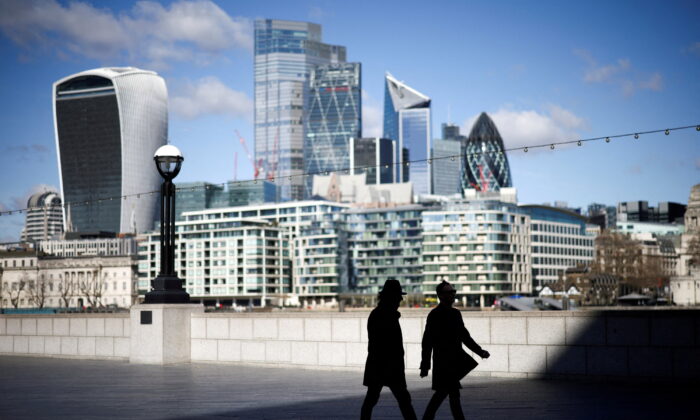 The City of London financial district can be seen as people walk along the south side of the River Thames, in London, on March 19, 2021. (Henry Nicholls/Reuters)
UK

The UK economy will contract more than any other G-7 nation next year, according to the latest forecasts from the Organisation for Economic Cooperation and Development (OECD).

Germany is the only other G-7 country set to see a contraction in GDP next year, with a 0.3 percent drop, according to the report.

Italy will see only paltry growth of 0.2 percent, while the United States will eke out 0.5 percent expansion, with GDP set to rise by 0.6 percent in France, 1 percent in Canada, and 1.8 percent in Japan.

The UK is also the third-worst performing nation of all the G-20 countries worldwide, with only Russia and Sweden seeing a bigger decline in GDP, at 5.6 percent and 0.6 percent.

The OECD blamed the predicted downturn partly on the UK government’s energy support scheme, which caps average household energy bills at around £2,500 ($2,960) until April.

Under the energy price guarantee introduced by then-Prime Minister Liz Truss, the cap—limiting the price companies can charge customers per unit of energy they use—was to have lasted for two years from Oct. 1.

But after Jeremy Hunt replaced Kwasi Kwarteng as chancellor of the Exchequer, he announced that it would end at its current level after six months, after which more targeted help would be provided to the most vulnerable.

In his autumn budget, unveiled on Nov. 17, he announced that the energy price guarantee will continue for a further 12 months from April, but will rise from the current £2,500 to £3,000 ($3,560) per year for the average household.

The OECD report said the support package will push up inflation, forcing policymakers to raise interest rates further as they try to rein in price and wage rises.

It said: “The untargeted Energy Price Guarantee announced in September 2022 by the government will increase pressure on already high inflation in the short term, requiring monetary policy to tighten more and raising debt service costs.

“Better targeting of measures to cushion the impact of high energy prices would lower the budgetary cost, better-preserve incentives to save energy, and reduce the pressure on demand at a time of high inflation.”

The OECD said UK inflation—which hit a 41-year high of 11.1 percent in October—will likely peak at the end of this year and remain above 9 percent into early 2023, before slowing to 4.5 percent by next year-end and to 2.7 percent by the end of 2024.

The report sees UK interest rates rising further from 3 percent currently to 4.5 percent by April 2023, while unemployment will lift from 3.6 to 5 percent by the end of 2024.

On Britain’s outlook, the OECD cautioned: “Risks to the outlook are considerable and tilted towards the downside. Higher-than-expected goods and energy prices could weigh on consumption and further depress growth.

“A prolonged period of acute labour shortages could force firms into a more permanent reduction in their operating capacity or push up wage inflation further.”

But it said households may choose to return to the jobs market to help boost stretched finances.

“While households may seek to boost their real income by striking for stronger wage increases, they may also increase their labour supply either by returning from inactivity or by increasing working hours, which would be an upside risk,” the report stated.

When asked for Prime Minister Rishi Sunak’s response to the OECD, his official spokesman said, “These are challenges that are affecting different countries at slightly different times.”

Shadow Exchequer Secretary to the Treasury Abena Oppong-Asare said it was a “direct result of 12 years of Tory failures on both our energy and our economic security.”

“They’ve failed to secure our economy and get it growing which has left us exposed to any external shocks,” she said.

The Office for Budget Responsibility (OBR) confirmed on Nov. 17 that Britain was officially in recession and that the previous eight years’ growth would be wiped out.

The OBR, in its assessment of the UK economy, said: “Rising prices erode real wages and reduce living standards by seven percent in total over the two financial years to 2023–24 (wiping out the previous eight years’ growth), despite over £100 billion of additional government support.

“The squeeze on real incomes, rise in interest rates, and fall in house prices all weigh on consumption and investment, tipping the economy into a recession lasting just over a year from the third quarter of 2022, with a peak-to-trough fall in GDP of two percent.”

The OBR also predicted unemployment would rise to 4.9 percent in the third quarter of 2024.