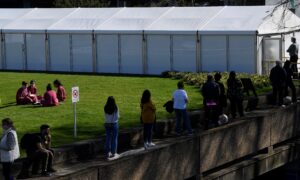 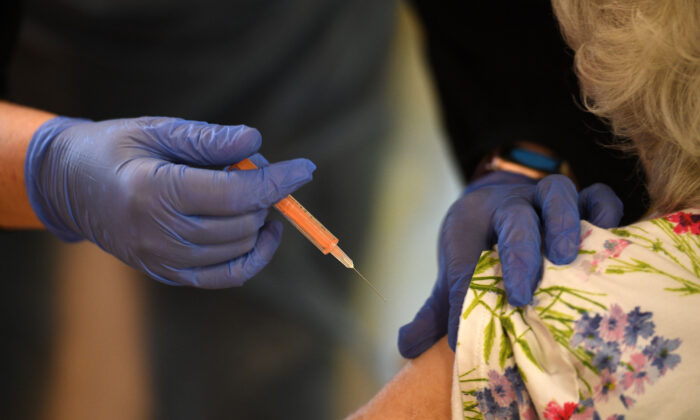 A resident receives a dose of the Oxford/AstraZeneca COVID-19 vaccine at the Belong Wigan care home in Wigan, northwest England, on Jan. 21, 2021. (Oli Scarff/AFP via Getty Images)
UK

A UK study that is examining the effect of mixing different COVID-19 vaccines was expanded on Wednesday to include two more vaccines.

The first round of the Comparing COVID-19 Vaccine Schedule Combinations (COM-COV) trial, which was launched in February, recruited 830 participants to trial combining the Oxford/AstraZeneca vaccine and the Pfizer/BioNTech vaccine.

Now with the rollout of the Moderna vaccine beginning on April 7, and the Novavax vaccine expected to be approved soon, COM-COV2, the new trial launched on Wednesday, will add the two new vaccines into the mix.

The study is expected to enroll 1,050 new participants aged 50 and over who have received only one dose of a COVID-19 vaccine (Pfizer or AstraZeneca) through the national immunisation programme between Jan. 25 and March 20.

The participants will randomly receive either the same vaccine as their first dose, or a different one—Moderna or Novavax—without knowing which vaccines they received.

The participants will be asked to fill out an online diary for up to 28 days after their second dose, and have their blood (and possibly nasal fluid and saliva) tested five to seven times over a period of 10 months.

“The focus of both this and the original COM-COV study is to explore whether the multiple COVID-19 vaccines that are available can be used more flexibly, with different vaccines being used for the first and second dose,” Matthew Snape, an associate professor in paediatrics and vaccinology at the University of Oxford, who is leading the trial, said in a statement.

“If we can show that these mixed schedules generate an immune response that is as good as the standard schedules, and without a significant increase in the vaccine reactions, this will potentially allow more people to complete their COVID-19 immunisation course more rapidly,” he said.

“This would also create resilience within the system in the event of a shortfall in availability of any of the vaccines in use.”

Everybody in the government’s top nine priority groups—those aged 50 and over, the clinically vulnerable, and health and social care workers—has been offered a vaccine, the Department of Health and Social Care (DHSC) said.

The UK government on Tuesday began inviting people aged 45 or over to book their jabs.