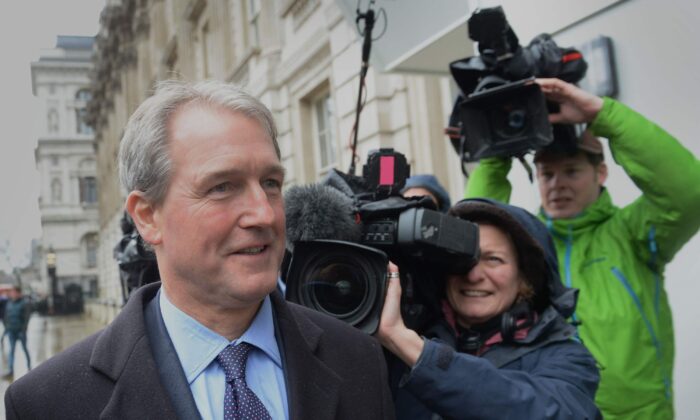 Owen Paterson with reporters after a parliamentary standards watchdog found said he had broken rules on lobbying, on Oct. 26, 2021. (Stefan Rousseau/PA)
UK

A former British Cabinet minister is facing a 30-day suspension from Parliament after a watchdog found he had breached rules on lobbying.

Conservative MP Owen Paterson said that the investigation into him was biased, accusing the parliamentary commissioner of making up her mind before speaking to him.

The investigation found Paterson repeatedly lobbied ministers and officials on behalf of two companies for which he was acting as a paid consultant.

This was described as an “egregious” breach of the rules on paid advocacy.

The Commons Standards Committee, which carried out the investigation, recommended that MPs vote to suspend Paterson for 30 sitting days.

Paterson said in a statement that the process had been unfair, and that 17 witnesses who came forward to support him were ignored.

Paterson said that the investigation had played a major role in his wife’s decision to take her own life last year.

He told the committee that he had been trying to raise concerns about the contamination of milk and ham with banned carcinogenic substances. However, they found his actions to be in breach of the ban on paid advocacy.

In her report, Parliamentary Commissioner Kathryn Stone found that between November 2016 and November 2017 Paterson made three approaches to the Food Standards Agency (FSA) relating to Randox—a clinical diagnostics company—and antibiotics in milk.

He was also found to have made four approaches to ministers at the Department for International Development relating to the company and blood testing technology between October 2016 and January 2017.

And Paterson was found to have made seven approaches to the FSA between November 2017 and July 2018 relating to Lynn’s Country Foods.

The commissioner also found that he failed to declare his interest as a paid consultant to Lynn’s Country Foods in four emails to FSA officials. Additionally he used his parliamentary office for business meetings with his clients on 16 occasions between October 2016 and February 2020.

He also sent two letters relating to his business interests on House of Commons headed notepaper—the only breach of the rules that he accepted.

Paterson no doubt believed he had not broken the rules, said a statement from the committee.

“Mr Paterson is clearly convinced in his own mind that there could be no conflict between his private interest and the public interest in his actions in this case,” said the statement. “But it is this same conviction that meant that Mr Paterson failed to establish the proper boundaries between his private commercial work and his parliamentary activities.”

The committee recommended that a motion to suspend Paterson should be tabled for MPs to debate and vote on within five sitting days.

Paterson said the investigation had left his wife feeling “beleaguered,” fearing that his reputation would be destroyed and that he would be forced to resign as MP for North Shropshire.

“We will never know definitively what drove her to suicide, but the manner in which this investigation was conducted undoubtedly played a major role,” he said.

Paterson called on MPs to waive parliamentary privilege so he can challenge it in the courts.

If Paterson is suspended, it could lead to a by-election, if over 10 percent of his constituents demand one via a petition.