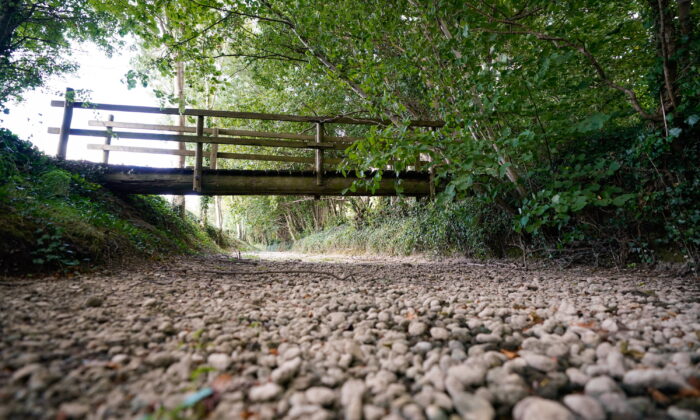 A view of a dried up river bed of the River Thames near to Somerford Keynes in Gloucestershire, England, on Aug. 5, 2022. (Andrew Matthews/PA)
UK

Environment Secretary George Eustice on Saturday urged water companies across the UK to ban hosepipes amid a dry August.

It comes as the Met Office’s forecast said the UK will mostly be dry and turning hotter this week.

Writing in The Telegraph, Eustice said some companies have “rightly taken action to mitigate the effects of this prolonged dry weather,” and that he “strongly urge[s] others to do the same.”

Southern Water has already imposed a hosepipe ban for customers in Hampshire and on the Isle of Wight which started on Friday, banning the use of a hosepipe to water a garden, clean a vehicle, wash windows, or to fill a paddling pool, domestic pond, or ornamental fountain.

The measure will follow exactly a week later for South East Water customers in Kent and Sussex.

Welsh Water has also announced a ban for Pembrokeshire and Carmarthenshire later this month.

Eustice also urged companies to fix leaks and water main bursts to help meet the mandatory target of reducing per-person water use in England by 20 percent.

The target “will be met by reducing water leakage by almost one-third by 2037 and a 9 percenty [sic] reduction in water use for business and industry,” according to the environment secretary.

He also said the government will set out steps “shortly” to implement mandatory water efficiency labelling, “to help reduce personal water consumption to 110 litres per day by 2050 by supporting consumer choices.”

A spokesperson for industry body Water UK said: “Every company has a drought plan in place, agreed with the ministers and the Environment Agency. These set out specific triggers for activating different levels of response (including hosepipe bans).

The spokesperson said the government had left the decision of when each plan should be triggered to water companies.

“In making those judgments, companies use specific indicators and criteria set out in the plans agreed with [the] government,” the spokesperson said.

“Companies are in constant dialogue with Defra [the Department for Environment, Food, and Rural Affairs] and regulators on their position, as well as their forward forecasts, plans, and actions.”

The spokesperson said companies are “perfectly prepared to use restrictions to protect the environment where that becomes necessary,” and that they have also helped the environment by “sending pulses of cold water from reservoirs to rehydrate and cool down rivers to protect fish” and by “choosing their sources of water in a way that tries to alleviate as much pressure as possible on hot-spot areas of low river flows.”