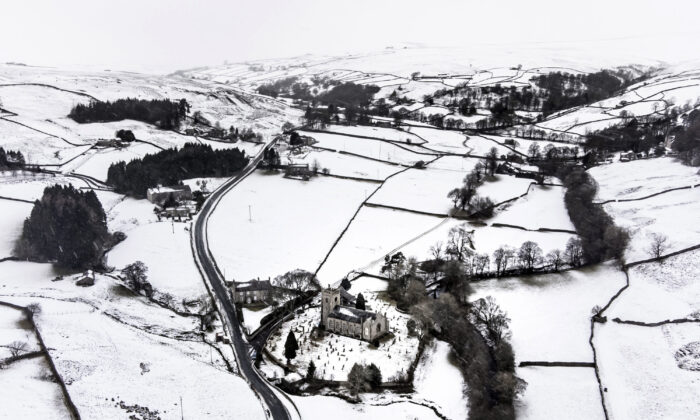 Snow covers fields and hills surrounding St, Mary The Virgin Church in the Arkengarthdale, North Yorkshire, amid freezing conditions in the aftermath of Storm Arwen, on Nov. 28, 2021. (Danny Lawson/PA via AP)
UK

Northern Powergrid, a UK electrical distribution company, thanked customers for not trying to cash out trillion-pound checks the firm had mistakenly sent as compensation for power cuts.

In November 2021, heavy storms swept across the UK that left thousands of people without power. As compensation, 74 customers received checks worth trillions of dollars, amounts that the company claims are a clerical error.

Instead of the amount payable, those in charge of writing the checks erroneously quoted the customers’ energy meter numbers, resulting in some customers receiving checks for more than 2.3 trillion pounds ($3.1 trillion).

The error was brought to attention when one customer, Gareth Hughes, wrote about it on Twitter. “Thank you for our compensation payment @Northpowergrid for the several days we were without power following #stormarwen Before I bank the cheque however, are you 100% certain you can afford this?” Hughes wrote.

A company executive soon responded to the tweet, thanking Hughes for bringing the matter to their attention. The tweet has since gone viral, attracting more than 56,000 likes and 6,700 retweets at the time of publication. It also attracted numerous comments mocking the ridiculous situation.

“Be a sport and clear the national debt mate,” stated one tweet.

“Well at least one family will be able to pay their energy bill this spring,” wrote another.

One user thought the company’s tech department shouldn’t have missed such a basic check error. “Somebody wrote a nifty little script to translate numbers to words but no one thought to validate the actual number! Very basic data entry checks were missed,” he wrote in a tweet.

Danielle Henderson, another Northern Powergrid customer who had lost electricity for an entire week during the storm, received a check for 1.5 trillion pounds ($2.13 trillion). “When we opened the letter we laughed, in all honesty,” she told Sky News. “It’s been a comedy of errors since the electricity went off for a week.”

Storm Arwen is estimated to have disrupted more than a million properties in Great Britain. Roughly 280,000 of the company’s customers in northern Lincolnshire, Yorkshire, and North East were affected. The energy firm had sent more than 29,500 compensation payments as of Feb. 11.

A spokesperson from Northern Powergrid said the company had immediately voided the trillion-dollar checks when it came to their attention. This was an “isolated incident,” the spokeswoman said, according to Sky News.

“We thank those customers who were honest and contacted us, and we have been making contact directly over the weekend with all 74 customers affected to make them aware, apologise for the error, and reassure them that a correct payment will be issued.”