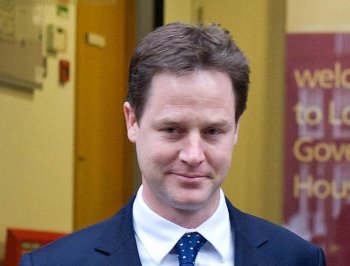 By Stephen Jones
Print
LONDON–Only once before, in almost a hundred years, has the UK election had a result like last week's.

This time, Britain's political parties will be looking to avoid some of the worst issues arising from the events of 1974.

As it becomes more likely that there will be a coalition pact between the Conservatives and the left-leaning Liberal Democrat Party, pundits are already predicting an end to Britain's electoral system, which favors clear winners and losers.

Britain stands apart from many European countries, which have since the postwar period favored a proportional system in which coalition governments are more common.

However the traditional instability of coalitions is likely to worry markets over the ability of any possible government to begin to reduce the country's 165 billion pound (US$245 billion) deficit.

Lord Donoghue, who in 1974 was a policy adviser for Harold Wilson, the prime minister of the minority government, has spoken of the uncertainty at the time when there was no majority in Parliament.

“You are aware, as you go through the front door of Number 10 Downing Street every morning, that the government might fall by the evening,” he told the BBC.

On Thursday the Conservative Party won 306 seats, just shy of a majority, but more than Labour who won 258 seats.

The Lib Dems, who won just 57 seats, will be the kingmakers in any coalition government. The Conservative and Lib Dem parties met several times over the weekend to thrash out some kind of coalition deal, with senior government figures pressing them to finalise a deal within days to avoid instability in the financial markets.

Analysts have drawn frequent parallels with the 1974 hung Parliament. Back then, as now, the Conservatives won more votes, yet failed to secure a majority.

However coalition talks between Edward Heath's Conservatives and the Liberals failed, and Harold Wilson, the Labour leader, governed the country with a minority government.

Back then, although 27 items of legislation were passed in the eight months before a fresh election was called, none of them were targeted toward reducing the soaring inflation, which was on its way to a rate of 27 percent.

For many, given the current economic climate, the results of last week's general election is simply a case of history repeating itself.

“Companies across the U.K. have expressed significant concerns about how a hung Parliament could affect the decisive action needed to cut the deficit and improve the business environment,” said Adam Marshall, director of Policy at the British Chambers of Commerce.

“The electorate has spoken—and opted for a hung parliament. But the business community has also spoken—and expects the parties to put political horse-trading to one side and put the U.K. economy at the heart of their thinking.”