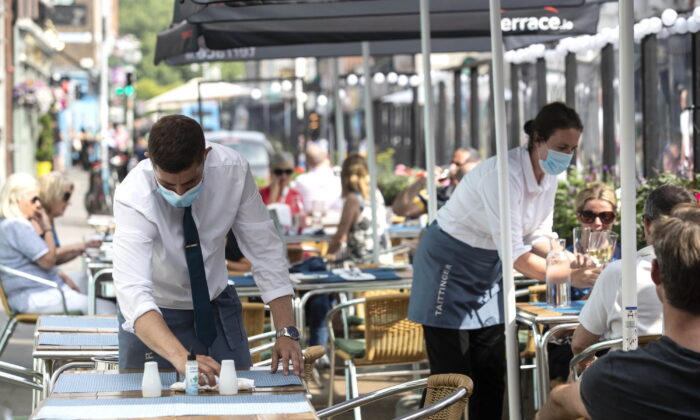 UK economic growth slowed more sharply than first thought between July and September and fears are mounting that Omicron and accompanying control measures will send the recovery into reverse.

The Office for National Statistics (ONS) said the economy expanded by 1.1 percent in the third quarter, compared with an initial estimate of 1.3 percent.

This marks a sharp pullback on growth in the second quarter, when UK output increased by a revised 5.4 percent following the easing of Covid-19 restrictions.

It comes even before the impact of Omicron, which is widely expected to see the economy contract in December as consumers retrench in the face of the new variant and restrictions to control it, with worries that further measures could also affect the first quarter of 2022.

The ONS blamed the downward revision to third-quarter figures on weaker spending on services such as hairdressing, as well as the fall-out from dozens of energy firms collapsing.

But it said the UK economy has recovered more ground towards where it was before the pandemic struck thanks to a stronger rebound than first thought in 2020, and is now 1.5% below where it was at the end of 2019.

This compares with the previous estimate of 2.1 percent below the pre-pandemic level, though it still leaves the UK lagging behind many other advanced economies, with output in the US and China already back above pre-pandemic levels.

Darren Morgan, ONS director of economic statistics, said: “Our revised figures show UK GDP recovered a little slower in the third quarter, with much weaker performances from health and hairdressers across the quarter, and the energy sector contracting more in September than we previously estimated.

“However, stronger data for 2020 means the economy was closer to pre-pandemic levels in the third quarter.

“With the economy reopening in the third quarter, households saved less in the latest period.

“However, household saving was still up on pre-pandemic levels.”

The ONS data has revealed the impact of supply chain problems and shortages over the summer, with car sales hit by a shortage of semiconductor chips and construction projects delayed amid difficulties in getting materials.

Some 25 energy firms have also gone under since the start of September alone as the sector has been sent reeling by rocketing wholesale gas prices.

Official monthly GDP figures have since shown the economy eked out growth of just 0.1% in October.

And recent economic surveys point to a further slowdown over the fourth quarter as Britons have been staying at home in the crucial run-up to Christmas, knocking trade for hospitality, leisure and retail sectors.

The closely-watched IHS Markit/CIPS Flash UK Composite PMI for December signalled that the UK’s economic growth slowed to its slowest pace since February, when the country was in lockdown.

Businesses say they have been hit by lower customer demand in December since Omicron came to the UK and new restrictions were imposed.

Soaring inflation is also set to weigh on consumer spending, with the Bank of England last week raising interest rates to 0.25 percent from 0.1 percent in a bid to rein in rising prices and warning that inflation could hit a near 30-year high of 6 percent next April.

“But while this is likely to mean that the level of output falls in the second half of December, and with the Government undecided on whether to reintroduce restrictions, the outlook for the early part of 2022 remains uncertain.”

Figures also released on Wednesday by the ONS showed Britain’s balance of payments deficit widened to £24.4 billion due to a fall in goods exports, while goods imports increased and overseas firms received more income from their investments in the UK.