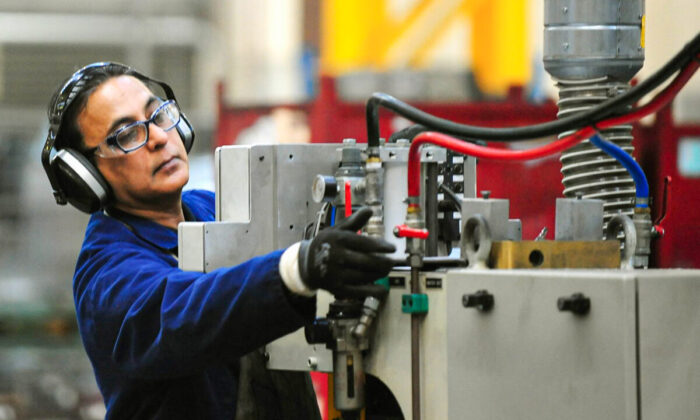 A man working in a factory in the United Kingdom, in an undated file photo. (Rui Vieira/PA)
Economy

The UK economy contracted in both March and April, the first back-to-back monthly decline since the start of the COVID-19 lockdowns two years ago.

According to the latest figures released by the Office for National Statistics (ONS), GDP fell by 0.3 percent in April 2022, after a decline of 0.1 percent in March 2022.

The ONS said it marked the first time GDP has fallen for two months in a row since March and April 2020, when the CCP (Chinese Communist Party) virus pandemic first hit and sent the economy tumbling.

Darren Morgan, director of economic statistics at the ONS, said, “A big drop in the health sector due to the winding down of the Test and Trace scheme pushed the UK economy into negative territory in April.”

The ONS attributed April’s GDP decline mainly to the 0.3 percent fall in services, largely owing to the ending of the government’s COVID-19 Test and Trace programme and lower vaccination activity.

With the Test and Trace and vaccines impact stripped out, GDP would have risen by 0.1 percent in April, the ONS said.

According to Morgan, manufacturing also suffered with some companies telling the ONS they were being affected by rising fuel and energy prices, though these were partially offset by growth in car sales, which recovered from a significantly weaker than usual March.

Production fell by 0.6 percent in April 2022, driven by a fall in manufacturing of 1.0 percent on the month. Construction also fell by 0.4 percent, following strong growth in March 2022 when there was significant repair and maintenance activity following the storms experienced in the latter half of February 2022.

This is the first time that all main sectors have contributed negatively to a monthly GDP estimate since January 2021, the ONS said.

Chancellor Rishi Sunak said: “Countries around the world are seeing slowing growth, and the UK is not immune from these challenges.

“I want to reassure people, we’re fully focused on growing the economy to address the cost of living in the longer term, while supporting families and businesses with the immediate pressures they’re facing.”

Meanwhile, Prime Minister Boris Johnson said the negative economic data was down to an “inflationary price bump” that the country will “get through very strongly indeed.”

Speaking to reporters on a visit to Cornwall, he emphasised the “very strong” fundamentals and low unemployment.

But Labour leader Sir Keir Starmer called the latest figures “a real cause for concern for millions of people who are struggling already to pay their bills.”

He said the Conservative government is “out of touch and out of ideas.”