Britain: Hong Kong people who hold a BNO are welcomed in the UK
0 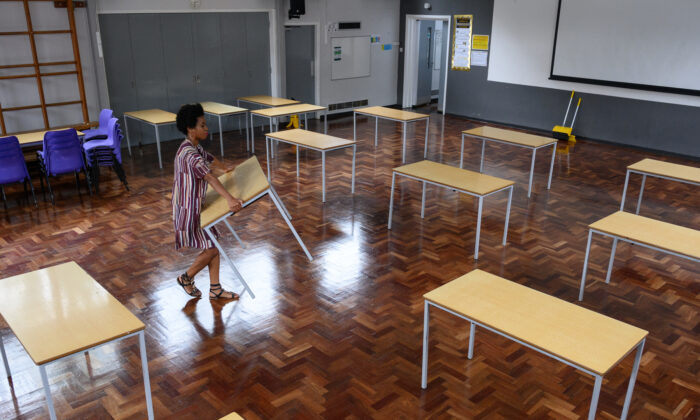 Teacher Muriel Thompson carries a desk into the temporary classroom within the school hall, ahead of the return of more students from Reception and Year Six of Muswell Hill Primary School on June 03, 2020 in London, England. (Leon Neal/Getty Images)
UK

LONDON—The British government on June 9 ditched plans to have all primary school children in England return to the classroom before the summer vacation after schools voiced worries about their ability to meet CCP virus social distancing requirements.

Education Secretary Gavin Williamson admitted that the goal for approximately 5 million primary school children from ages 4 to 11 wasn’t possible, given constraints related to classroom sizes, the need for social distancing, and inadequate numbers of teachers.

“We believe this cautious, phased return is the most sensible course of action to take,” Williamson told lawmakers when announcing the change.

However, he said the government would like to see schools that “have the capacity” bring back more pupils before the summer break in July.

Although many of England’s primary schools have been open this entire spring for the children of key workers—including health care professionals, delivery drivers, and journalists—the Conservative government had planned to give all younger pupils the chance to return following months of home learning.

Last week, the very youngest schoolchildren were allowed to return as well as those in their final year of primary school who are due to make the transition to secondary school in September. The plan was that all others would return in stages.

Williamson said just over 50% of primary schools reopened to more children last week and that this increased to more than 70% by June 8.

“The ‘ambition’ to bring back all primary year groups for a month before the end of the summer term was a case of the government over-promising something that wasn’t deliverable,’’ said Geoff Barton, general secretary of the Association of School and College Leaders.

Williamson said secondary schools would still provide face-to-face support for some children from next week, and that exams will go ahead next year.

The government confirmed June 9 that all nonessential shops in England, such as department stores and electronics retailers, can reopen June 15 provided they conduct a COVID-19 risk assessment and can maintain social distancing guidelines so the people inside stay at least two meters (6 1/2 feet) apart.

Getting COVID-ready is difficult, as English schools have found out.

The government wants class sizes capped at 15 so that social distancing rules can be followed. Given the small size of many U.K. classrooms, many schools have had to limit teaching groups to just 10 children.

Schools have introduced staggered starting and ending times to make sure there’s as little crossover as possible between children, and playgrounds have been divided into sections so groups don’t mix.

In addition, many schools are having children eat packed lunches at their desks or outside in playgrounds, and insist on a change of clothes every day. Some have abandoned uniform requirements. Schools have also introduced regular cleaning of the classrooms both during and after the school day, in addition to a weekly deep cleaning. One-way walking systems have also been put into place around school buildings to limit interactions between groups.

These are profound changes to the way schools operate and there are mounting concerns that the impact will reverberate into the next school year, which begins in September.

“Government now needs to provide urgent clarity on the anticipated constraints that schools may face in September so that schools and parents can start to look ahead and plan with greater understanding of the possible disruption,” said Paul Whiteman, general secretary of school leaders’ union NAHT.

Amid all the confusion, there are worries over the educational and emotional damage on children whose schooling has been interrupted for so long.

Elsewhere in the U.K., Scotland and Northern Ireland have said schools won’t be reopening until August, while Wales is making plans to welcome students back later this month.

Conservative lawmaker Robert Halfon, chairman of the Commons Education Committee, urged the government to reconsider and warned of an “epidemic of educational poverty.”

“Why is it that we can turn a blind eye to thousands of demonstrators, campaign for pubs and garden centers to open, yet it is so hard to reopen our schools?” he said.