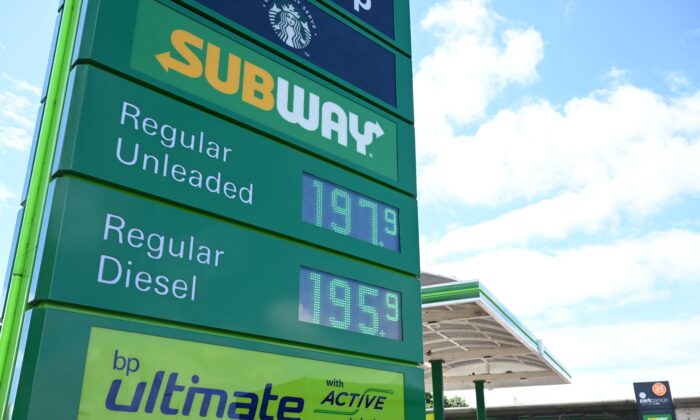 The price of diesel and unleaded petrol fuels are displayed on a sign outside a BP petrol station in Wigan, northwest England, on June 8, 2022. (Paul Ellis/AFP via Getty Images)
UK

The average cost of a litre of petrol rose by 16.59 pence in June, from 174.8 pence to 191.4 pence, adding more than £9 to the cost of filling a typical 55-litre family petrol car, according to an analysis of data from RAC Fuel Watch.

It smashed the previous 11 pence record set in March, and became the highest monthly increase in records dating back to 2000.

Average diesel prices rose by 15.6 pence per litre, ending the month at 199.1 pence.

According to the RAC, the record-breaking price hike took place despite the weekly wholesale costs paid by retailers dropping for five straight weeks.

The organisation’s fuel spokesman Simon Williams said: “The rate at which pump prices have been rising over the last four weeks is hard to comprehend. Not a day in June went by when petrol prices didn’t go up, even though the price retailers pay to buy in fuel went down.

“There’s no doubt that drivers are getting an incredibly raw deal at the pumps at a time when the cost-of-living crisis is being felt ever more acutely.”

The RAC called on retailers to cut prices to reflect lower wholesale costs, and also urged the government to help by temporarily cutting fuel duty or reducing VAT on fuel.

Williams said: “The silence from the Treasury when it comes to supporting drivers through this time of record high pump prices is, frankly, deafening. Perhaps it has something do with the fact that it’s benefiting significantly from the increased VAT revenue caused by the high prices.”

“We badly need the government to go beyond just vague words and instead actually implement a clear package of financial support to show they’re on the side of drivers,” he said.

The rising fuel prices have triggered protests this week. On Monday, 12 people were arrested as dozens of campaigners calling for a cut in fuel duty targeted the M4 in South Wales and Somerset, and stretches of the M5 from Devon to Bristol, with rolling go-slow roadblocks in the morning rush-hour.

Home Secretary Priti Patel called on police to use new powers which include imprisonment to stop fuel protesters bringing gridlock to major roads.

The main opposition Labour Party accused the Conservative government of having “no answers to the savage price hikes facing working people during a cost-of-living crisis.”