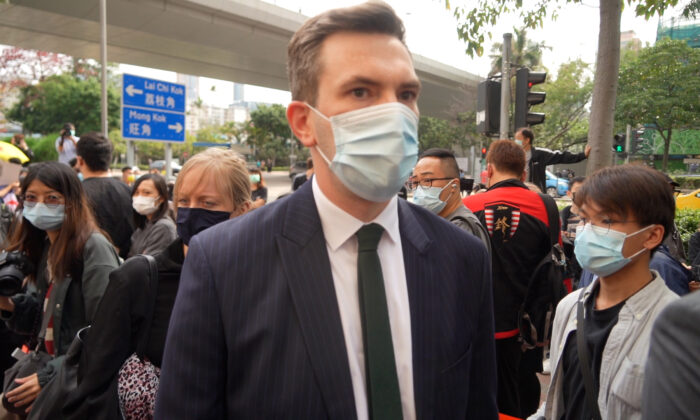 A British diplomat was among the foreign diplomats in Hong Kong queuing on Monday morning to attend the hearing of the 47 dissidents charged on Sunday under the “national security law.”

The UK’s Foreign Secretary Dominic Raab on Monday said that the Beijing-imposed national security law is a political tool to stifle dissenting voices, and is in violation of the Sino-British Joint Declaration.

Forty-seven Hong Kong dissidents were charged on Sunday with conspiracy to commit subversion, in the largest single clampdown on the city’s pro-democracy opposition under a Beijing-imposed “national security law.”

“The decision to charge 47 Hong Kong politicians and activists for conspiracy to commit subversion under the National Security Law is another deeply disturbing step,” Raab said in a statement on Monday.

“It demonstrates in the starkest way the use of the law to stifle any political dissent, rather than restore security which was the claimed intention of the legislation.

“The National Security Law violates the Joint Declaration, and its use in this way contradicts the promises made by the Chinese government, and can only further undermine confidence that it will keep its word on such sensitive issues.”

On Monday morning, Jonathan Williams, the head of political and communications at the British Consulate-General Hong Kong, was among diplomats seen queuing outside the West Kowloon Magistrates’ Courts, where the hearing was held.

The European Union, the United States, and Taiwan on Sunday also condemned Hong Kong authorities and called for the immediate release of the people arrested.

“The charges laid on 28 February against 47 pro-democracy candidates who took part in primary elections last July is of great concern to the European Union,” the EU office to Hong Kong and Macao wrote in a Facebook post.

“The nature of these charges makes clear that legitimate political pluralism will no longer be tolerated in Hong Kong,” it added.

The statement said the EU “urges Hong Kong and Beijing authorities to abide by their commitments to fundamental freedoms and the rule of law, as enshrined in the Basic Law and the International Covenant on Civil and Political Rights” and calls for the “immediate release of those arrested,” and said that the EU will continue to “monitor closely the ongoing developments.”