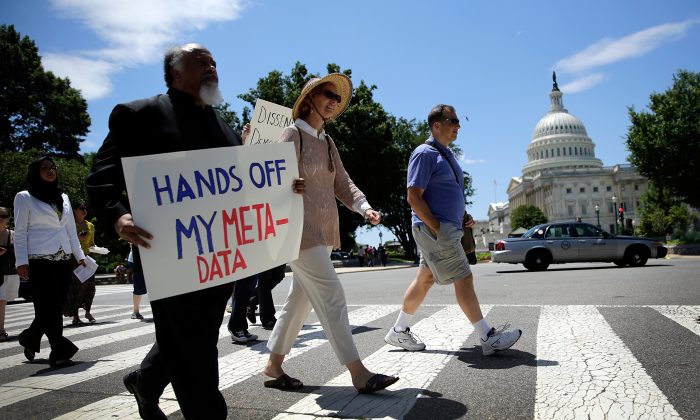 Protesters rally outside the U.S. Capitol against the NSA's recently detailed surveillance programs on June 13, 2013 in Washington, DC. The debate on government's anti-terrorism efforts and civil liberties have been intensified in the U.S. and the UK after latest revelations by former U.S. intelligence contractor Edward Snowden suggesting that U.S. and UK intelligence agencies have cracked Internet encryption codes. (Win McNamee/Getty Images)
UK

LONDON—The latest documents revealed by former U.S. intelligence contractor Edward Snowden suggesting that U.S. and UK intelligence agencies have cracked Internet encryption codes has once again many people questioning the extent governments should be allowed to breach privacy in the name of security.

The revelations, published by the Guardian, the New York Times, and ProPublica, show that with the ability to crack encryption codes, the U.S. National Security Agency (NSA) and its UK counterpart GCHQ can potentially have access to people’s online data and transactions such as medical records, emails, and bank details.

In the UK, the debate on government’s anti-terrorism efforts and civil liberties had already been intensified recently after David Miranda, partner of the Guardian reporter who extensively covered Snowden, was held by authorities for 9 hours at the Heathrow Airport for questioning.

As it stands now, the UK government has made the third highest requests in the world for Facebook and Twitter user data this year, and the highest number of requests for Skype user data in 2012.

Imran Awan, a criminologist at the Birmingham City University, says using technology to fight terrorism is not a simple task.

“It’s dangerous because you will inevitably get innocent people caught up in it,” Awan says.

He says legislative initiatives such as the communications data bill that Home Secretary Theresa May tried to push through last year would make it legal for the government to monger “anything and everything,” which breeches people’s civil liberties.

The communications data bill, dubbed by some the “snooper’s charter,” would make it mandatory for Internet service providers to track the records of everyone’s Internet use data such as web browsing history and social networking site messages, and store the data for 12 months, without storing the content. The records could be accessed by the police without a warrant.

The bill, which was originally introduced in June 2012, was opposed by the Deputy Prime Minister Nick Clegg who said the bill lacks balance between security and liberty.

In a private letter leaked to the Guardian, Google, Microsoft, Facebook, Yahoo!, and Twitter also wrote to May last April that the bill is “expensive to implement and highly contentious,” and that they would not voluntarily comply with the bill.

But May and Defense Secretary Phillip Hammond and other MPs became keen to revive the bill in the wake of the tragic murder of the 23 year-old British soldier, Lee Rigby, in Woolwich in May this year.

They believe that the extension of monitoring powers would help prevent similar extremist attacks.

Anthony Glees, a professor of politics at the University of Buckingham and the director of the university’s Centre for Security and Intelligence Studies, says laws such as what the communications data bill is proposing are not about eroding civil liberties, but rather protecting civil liberties.

“If anyone calls it the ‘snoopers charter’ is totally idiotic. It’s investigating; it needs to done lawfully,” Glees says.

“There are good people and bad people in this world. Let’s get the bad people.”

Despite the lobbying efforts for the bill, it is likely not going to get enough support to pass in its current form.

In an emailed response, a spokesperson with the Home Office reiterated a statement released earlier by the department on the issue: “The Government is committed to ensuring that law enforcement and intelligence agencies have the powers they need to protect the public and ensure national security,” the spokesperson said.

“The Government is continuing to look at ways of addressing this issue with communication service providers. This may involve legislation.”

Protecting the public while not intruding on privacy is indeed a delicate balancing act.

“A community constantly subjected to counter-terrorist measures would not be just, but that at the same time it would not be practical to say that states ought not to partake in surveillance,” says Fiona de Londras, a professor of law at the Durham University who is leading the EU-funded project SECILE (securing Europe through counter-terrorism: impact, legitimacy, and effectiveness.)

“It is a complex, multi-faceted, difficult phenomenon where simple answers are not appropriate. We have to acknowledge terrorism is complex,” de Londras says.