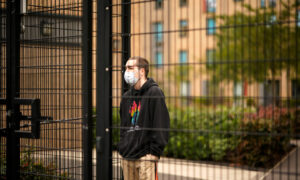 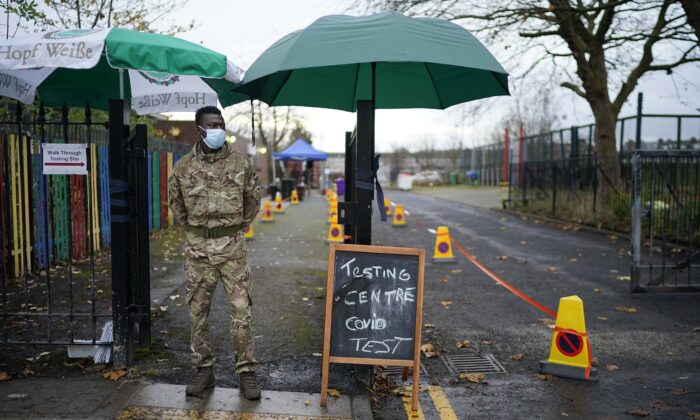 A soldier from the 1st battalion Coldstream Guards greets members of the public at a CCP virus testing centre set up at the Merseyside Caribbean Council Community Centre, in Liverpool, England, on Nov. 11, 2020. (Christopher Furlong/Getty Images)
UK

The UK recorded 33,470 CCP virus cases on Thursday, the highest daily number recorded since the pandemic started. Meanwhile, the reproduction number (R) has fallen back to between 1.0–1.2, the same level with two months ago.

According to official data, the UK on Thursday recorded 33,470 new cases where people tested positive for CCP (Chinese Communist Party) virus, 15 percent higher than the last record set on Oct. 21.

The UK government also publishes a different set of daily case number, which counts cases by dates on which specimens were taken. The graph of case numbers by specimen date showed a more obvious downward trend than the one by report date.

Meanwhile, The R number has fallen back to between 1.0–1.2, according to the latest number published on Friday by The Scientific Advisory Group for Emergencies (SAGE).

The R—the average number of secondary infections produced by a single infected person—is one of the criteria that the UK government uses to decide when to impose restrictions, along with number of cases.

Latest data published by the Office for National Statistics on Friday indicated that positivity rates in England have increased in recent weeks up until Nov. 6, but the rate of increase is slower than previous weeks.

Dr. Liam Smeeth, professor of clinical epidemiology from London School of Hygiene and Tropical Medicine, said he’s not “surprised or too dismayed” by the record-high number of cases.

“This all suggests high levels of infection around 7–10 days ago, around the time when stricter measures were put in place,” Smeeth said.

He attributed the delay to both the incubation period and the time between when symptoms emerge and when the test results came out.

He also said the high number may be partly a result of the increased number of tests, “rather than reflecting a true increase in infections.”

Dr. Deborah Dunn-Walters, professor of immunology at the University of Surrey also said the growing testing capacity may be one of the factors.

“This number will include the data from the mass testing in Liverpool using the lateral flow devices,” Dunn-Walters said. “I suspect that what we are seeing are some of the asymptomatic cases that were previously hidden to us when we only tested people with symptoms. It would be interesting to see what proportion of the cases were asymptomatic.”

The government started a pilot mass testing programme in Liverpool last Friday, the programme will be rolled out to 67 other areas in England.