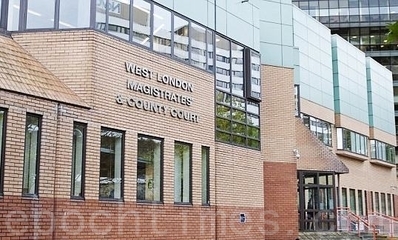 On Oct. 21 a man pled guilty in the British West London County Court to charges of attacking practitioners of the spiritual Falun Gong practice in London’s Chinatown two days earlier.

On Oct. 19, Falun Gong practitioners were holding a display in London’s Chinatown with banners and boards explaining the persecution the group is subjected to by communist authorities in China, when two men threw eggs at them.

One of the two men lashed out, knocking a practitioner’s glasses off and causing injury to his eyes. The assailant then fled the scene. The other man was apprehended by practitioners. Police arrived twenty minutes later, and praised the practitioners for the non-violent way they had caught and held the man.

Alexander Ortiz, a Filipino man with a history of drug abuse and crime, was apprehended by practitioners, taken in by police, and pled guilty in court on Oct. 21 to the attack. His lawyer said he has mental problems from drug abuse.

The court did not yet deliver a verdict. The judge said the attack is extremely serious and warrants more in-depth investigation. In addition, Ortiz will have to undergo psychiatric evaluation. The judge told Ortiz that if he wants to use mental problems as an excuse for committing a crime, the consequences could be more serious if it is found that he is mentally sound.

The case was adjourned until Nov. 11 and may be handed over to a higher tribunal, according to the judge.

According to local Falun Gong practitioners, this was the fifth time that they have been attacked in London’s Chinatown during the last year.

One of the practitioners who was at the scene on the day of the assault, and who gave his name as Anton, told the Epoch Times: “This is not an isolated case. Instead, it’s one of a series of intentional attacks on Falun Gong practitioners in Chinatown, and therefore I think this is an organized crime case.”

Anton added that he would submit additional evidence to the court to make sure the attackers would be brought to justice.

Similar violent attacks against Falun Gong practitioners have occurred frequently not only in London but also in New York, San Francisco, Hong Kong, and Taiwan.

Beginning in May 2008 in Flushing, New York, a series of violent attacks was carried out against Falun Gong practitioners who volunteered at a booth to help Chinese nationals quit their memberships with the Chinese Communist Party (CCP) and its affiliated organizations. Peng Keyu, the Consul General of the Chinese Consulate in New York, acknowledged during an undercover phone call that the consulate helped organize the assaults.

One of the assailants in Flushing, Li Huahong, carried a Chinese flag while loudly berating and harassing Falun Gong practitioners on numerous occasions. Li was convicted on Jan. 8, 2013 by the Queens Criminal Court in New York.

Falun Gong is an ancient Chinese spiritual discipline that includes moral teachings, a meditation, and four gentle exercises that are highly effective in improving health and energy levels. According to the Falun Dafa Information Center, faluninfo.net, in China, those who practice Falun Gong are subjected to severe human rights violations at the hands of the CCP. The scale and scope of abuses taking place make it possibly the largest religious persecution in the world, it says.

Credible, independent reports allege that Chinese military hospitals are engaged in the murder of tens of thousands of captive Falun Gong practitioners for the purpose of harvesting and trafficking their organs.

Translation by Joseph Ding. Written in English by Gisela Sommer.