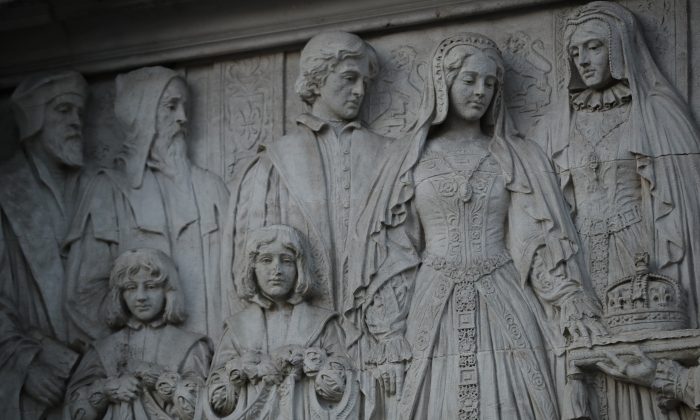 A general view of stonework on the Supreme Court on Dec. 6, 2016 in London, England. (Dan Kitwood/Getty Images)
UK

UK Court: Feeding Tubes for Vegetative Patients Can Be Withdrawn If Family and Doctors Agree

LONDON—Feeding tubes can be withdrawn from patients in a persistent vegetative state without legal permission, as long as the family and doctors are in agreement, the UK’s highest court has ruled.

Prior to the Supreme Court ruling (pdf) on July 30, each case was referred to a judge before artificial nutrition and hydration could be withdrawn.

It is estimated about 24,000 people in the UK are in a permanently vegetative state or a minimally conscious state.

The Supreme Court ruling stemmed from the case of a banker in his 50s who had suffered a heart attack and never regained consciousness, and was left unable to eat or drink, relying on a tube to his stomach to provide nutrition and hydration and keep him alive.

The doctors had reached the conclusion that there awas no prospect of any significant improvement in his condition. His family and doctors had agreed that it was not in his best interests to continue providing clinical nutrition.

The High Court had ruled that permission was not required from a judge to withdraw this nutrition, known as Clinically Assisted Nutrition and Hydration (CANH).

However, the Official Solicitor appealed on behalf of the patient, taking it to the highest court, the Supreme Court. That appeal did not challenge whether it was in the best interests of a patient to have CANH withdrawn, but instead challenged who should make the decision–the family and doctors, or a judge in a Court of Protection.

When the man died from unrelated causes, the court case continued to provide clarification on future cases.

Supreme Court Justice Lady Black said in the ruling: “Having looked at the issue in its wider context as well as from a narrower legal perspective, I do not consider that it has been established that the common law or the ECHR (European Convention on Human Rights), in combination or separately, give rise to the mandatory requirement, for which the Official Solicitor contends, to involve the court to decide upon the best interests of every patient with a prolonged disorder of consciousness before CANH can be withdrawn.”

“If the provisions of the MCA 2005 (Mental Capacity Act) are followed and the relevant guidance observed, and if there is agreement upon what is in the best interests of the patient, the patient may be treated in accordance with that agreement without application to the court.”

Lady Black said that medical knowledge and procedures around the issues had also developed considerably in recent decades. She also said it was still a matter of best practice to seek clarification in the Court of Protection.

But opponents of assisted dying criticized the ruling.

Advocacy group Care Not Killing said that it had “dramatically moved the goalposts on end of life decision-making.”

Campaign Director of Care Not Killing Dr. Peter Saunders said in a statement, “People with PVS (awake but not aware) and MCS (awake but only intermittently or partially aware) can breathe without ventilators, but need to have food and fluids by tube (clinically assisted nutrition and hydration or CANH).

“These patients are not imminently dying and with good care can live for many years. Some may even regain awareness. But if CANH is withdrawn, then they will die from dehydration and starvation within two or three weeks.”

Saunders said that the ruling left patients vulnerable to cost-based decisions on the part of relatives, and the state-run and state-owned National Health Service.

“Given that it costs about £100,000 per year to care for a person with PVS or MCS the potential ‘saving’ for the NHS could be as much as £2.4 billion annually if most seek to go down this route. Given the huge and growing financial pressure the health service is under is this really an additional pressure, no matter how subtle we want to put medical staff and administrators under.”

The NHS defines a vegetative state as “awake but is showing no signs of awareness.”

While they may wake up, open their eyes, and fall asleep at regular intervals, and even blink when they’re startled by a loud noise or withdraw their hand when it’s squeezed hard, they show no meaningful reactions, such as responding to voices, according to NHS England.