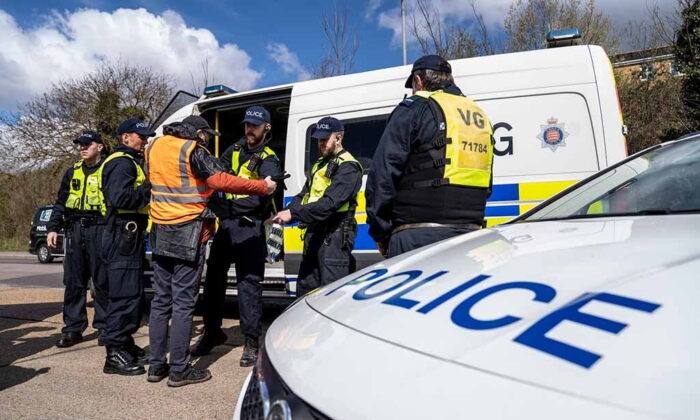 Police officers at a protest in Thurrock, Essex, on April 10. (Essex Police/PA)
UK

Two men have been convicted for taking part in climate protests which saw activists blocking access to oil terminals in the UK.

Louis McKechnie, 21, and Matthew Powell, 22, appeared at Chelmsford Magistrates’ Court on May 24 and admitted to aggravated trespass at the Exolum Storage in Thurrock in April, Essex Police said.

Powell was given a 12-month conditional discharge, which means the offence is registered on a criminal record and the punishment for the offence could be revisited if he offends again. He must also pay a total of £127 ($159) and was ordered to forfeit a D-lock which he had used during the disruption.

Essex Police welcomed the convictions. Assistant Chief Constable Glen Pavelin said: “We have consistently said our priority during this time was to ensure the safety of all those involved in the disruption, be that our own officers, other emergency services colleagues, and indeed those causing the disruption.

“Thankfully, in each instance, officers were able to act quickly to ensure the affected sites experienced minimal disruption and fuel supply was not adversely affected.”

He said the police investigative teams continue to build cases against a number of other suspects.

The pair are the second and third convictions by Essex Police over the disruption in Thurrock.

Last month, 64-year-old Catherine Maclean admitted to aggravated trespass at an oil terminal, and was ordered to pay £409 ($481) in fines and costs.

McKechnie and Powell appeared in court on Tuesday alongside 12 other people, who all denied charges against them.

The 12 defendants are next due to appear before Chelmsford Magistrates’ Court on Aug. 8. A three-day trial has been set for the same court to begin on Sept. 20, police said.

Since April 1, protesters from climate group Just Stop Oil, with the support of Extinction Rebellion, have been occupying oil terminals in various parts of the UK, demanding an end to new oil and gas projects.

Activists have climbed on top of oil tankers, locked themselves onto pipework, and occupied terminals, halting oil production and transportation.

Home Secretary Priti Patel said on May 9 the government is determined to stop protesters bringing Britain to a “grinding halt” and said, “The law-abiding, responsible majority have had enough of anti-social, disruptive protests carried out by a self-indulgent minority who seem to revel in causing mayhem and misery for the rest of us.”