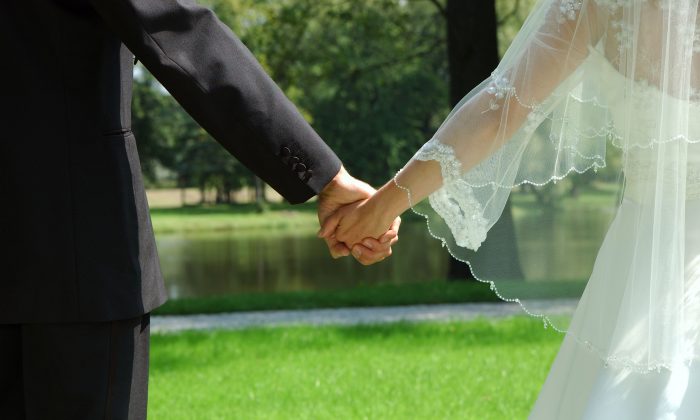 A stock photo of a married couple. (Waldemar Dabrowski/Shutterstock)
UK

A British couple said they won’t let critical social media comments discourage them from using a crowdfunding website to pay for their wedding ceremony in April.

Natalie Borg and Richard McMurray, who got engaged in January 2017, said they realized they couldn’t save enough for their April 27 wedding, as they were still $5,800 short, reported News.com.au.

“We’ve done the math and are still short of (and running out of time!!!) to cover our outgoings for our planned wedding on Saturday 27th April 2019,” Borg posted on GoFundMe on Jan. 18.

“Despite throwing all our wages at the wedding costs, selling our belongings and taking as many extra shifts at work as are available we are still falling short of our final bills,” she continued.

“As we can’t put off the wedding for another few months—(everything is booked) we are asking in lieu of any wedding gifts if you are able to please contribute anything to our costs for the day that would be amazing.”

Borg said the final payments for a photographer, venue, cake, and her dress haven’t been covered yet.

“We have no honeymoon budget and not worrying about this just want to be able to cover our bills for the day so it can go ahead,” she wrote.

However, the couple received backlash online for their crowdfunding efforts.

Some described them as “cheeky” for asking for GoFundMe donations, while others said they shouldn’t go ahead with the wedding due to its high cost.

“There are loads of people out there that are struggling to pay to get married, like myself and my partner! 15 years we have been together and we love each other very much and we would love to get married but we know that we cannot afford it but you don’t see us setting up a GoFundMe page and expect other hard working people out there to pay for our wedding,” wrote one person.

Another person implored them to “get a job” and save money, News.com.au reported.

“Save like everyone else and stop scrounging off other people!!! People like you anger me,” wrote the person.

Some said that they shouldn’t splurge on a huge wedding, but instead, they should just get married in a courthouse.

Callum Rowley stated, “Save enough for your marriage license that’s all you need.”

And Jean Thorburn added: “Just get married at registry. Then have a few drinks in the house,” The Mirror reported.

Borg has publicly defended the crowdfunding campaign, saying she asked people to donate instead of bringing gifts, as is the custom.

“I think if people had done a media campaign to pay for their wedding I would think that’s pretty cheeky, but if it’s to pay for the day instead of presents, it’s fine,” she said, according to The Metro.

"Pretty cheeky to set up a fundraising page for that."

“We don’t have a honeymoon booked, we’ve just booked two weeks off and will chill out and go out for walks to the beach. We’re not money-grabbing people, we’re people that have worked really hard for our big day,” she continued.

”I shouldn’t need to hide anything, I’m just a normal person and not a money-grabber.”