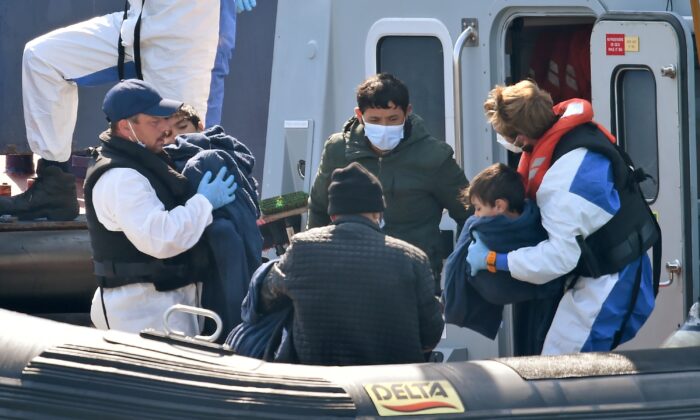 UK Border Force officers help migrants with children, believed to have been picked up from boats in the Channel, disembark from Coastal patrol vessel "HMC Hunter", in the port of Dover, on Aug. 9, 2020. (Glyn Kirk /AFP via Getty Images)
UK

The announcement came as the number of  unaccompanied asylum-seeking children (UASC) arriving in the UK reached a record high, and a row broke out between the UK and France over which country should take the migrants.

Kent County Council leader Roger Gough said he was “deeply disappointed and concerned” that the council had to make this announcement, and that the issue would have been resolved if there had been a nationwide effort to share the burden.

“The stark reality today is that, despite my conversations with the Home Office alerting them that Kent expected to reach safe capacity to meet its statutory duty of care this weekend, 13 new arrivals in the last 2 days has now tipped the balance and the council simply cannot safely accommodate any more new arrivals at this time,” Gough said in a statement.

Over 4,000 Crossed Channel This Year In Small Boats

The county of Kent is home to Dover harbor, a major ferry port located across the English Channel from the French port city of Calais.

Over the years, asylum seekers and migrants have made the perilous journey across the channel to the UK from France or other countries near the English Channel. Some attempt to travel by boat; others try to smuggle aboard lorries that are transported by ferry or via the Channel Tunnel.

In October last year, 39 bodies were found in a lorry in Essex, east England, adding to the numerous tragedies involving human trafficking. After Britain tightened its border control at sea ports, more migrants opted to travel in small boats.

Taking advantage of a spell of hot weather and calm sea conditions, hundreds of people including children and pregnant women have made the dangerous 21-mile crossing in recent days, many in overloaded rubber dinghies and other small vessels.

On Aug. 6 alone, 235 migrants made it across the channel in 17 boats, breaking the record set the previous week.

Gough said that Kent County Council has cared for and found homes for over 1,500 UASC in Kent since significant numbers arrived at the port of Dover in 2014 and 2015.

The council is currently responsible for 589 children and 945 young adults who have left care, “whilst still sustaining our focus on delivering high-quality services to citizen children in care,” Gough said.

According to Sue Chandler, a cabinet member for Kent’s Integrated Children’s Services, the county’s current problem of overcapacity could be solved if each other local authority in the UK accepted two or three UASC from Kent.

“Kent’s numbers would reduce to the council’s safe allocation as stated in the national transfer scheme (231 children)—Kent is currently caring for almost triple this amount,” Chandler said in a statement.

“We are grateful for the support some other local authorities have given recently, but, unfortunately, due to the continued high level of arrivals, it has not been enough to make a real difference to the numbers in Kent.”

Under the national transfer scheme (pdf), Kent can ask other counties to accept children on a voluntary basis. Chandler argues that the scheme has to be made mandatory.

“In the longer term, to ensure that any recurrence of this inconceivable situation is avoided in the future we are appealing to the Home Office to mandate the existing national transfer scheme, or provide alternative central government incentives, to guarantee that the future care of UASC is fairly distributed nationally,” she said.

Uncontrolled arrivals of asylum seekers and migrants from Africa, the Middle East, and Asia have long been a source of tension between European countries struggling to find an effective joint response.

The recent surge of channel crossing has ignited a new round of arguments between France and Britain.

Under the EU’s Dublin regulation, which Britain still has to follow during the Brexit transition period, Britain can return the migrants to the first EU country in which they arrived, but it has to be done within three months.

Home Secretary Priti Patel said in a tweet that the number of boat crossings was “appalling” and “shameful.”

“France and other EU states are safe countries. Genuine refugees should claim asylum there, not risk their lives and break the law by coming to the UK.”

Her office has asked the armed forces to help control the sea border, and appointed a small boat commander to work with France on the issue.

In response, French Mayor of Calais Natacha Bouchart on Aug. 13 told AFPTV that Britain created the problem because of its own out-of-date laws on border control.

“They [the British] have done so by failing to touch their legislation for 20 years,” she said, according to The Guardian.

She told Johnson to “calm down” and change the way Britain deals with migrants.

Criticism in the UK

Critics, such as groups campaigning for the rights of immigrants and refugees, accused the British government of stoking some voters’ xenophobic fears by magnifying the issue.

“Britain is better than this. The arrival of small numbers of people by boat is not a crisis,” said Stephen Hale, chief executive of Refugee Action, urging the government to focus on the CCP virus pandemic and resulting economic crisis.

According to a BBC tally, the numbers crossing the Channel illegally this year are equivalent to less than 1 percent of all immigrants last year.

Mary Clark and Reuters contributed to this report