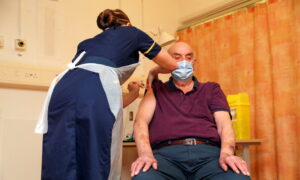 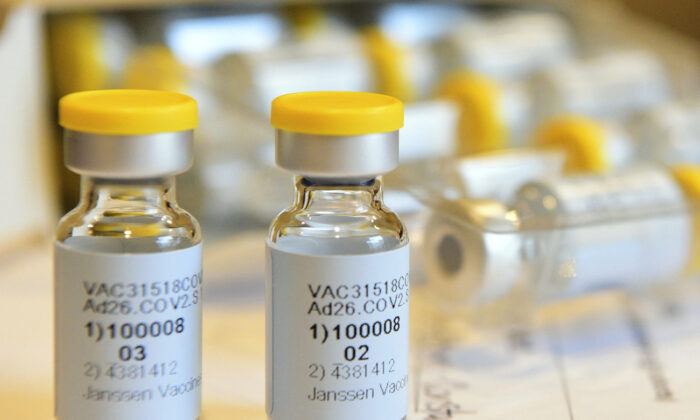 Within weeks, the UK could start to roll out 30 million doses of a new vaccine against the CCP virus, speeding up the country’s inoculation programme because it only requires one dose to be effective.

Both the Oxford/AstraZeneca and the Pfizer/BioNTech vaccines already being rolled out in the UK need two shots given weeks apart and provide relatively lower degrees of protection between first and second doses.

In November the one-shot vaccine developed by U.S. company Janssen, part of pharmaceutical giant Johnson & Johnson, began to undergo a phase of clinical trials in the UK involving 6,000 volunteers across the country.

It is still in larger-scale multi-country phase three trials but, according to the company, could be submitted for emergency-use approval as early as next month.

The Janssen vaccine is “highly likely to work” according to Sir John Bell, regius professor of medicine at the University of Oxford and UK Vaccine Taskforce adviser, and if approved will help the UK government accelerate its vaccination programme.

“My prediction is that it’ll work well, although we need to wait for the trial results,” he told The Telegraph on Wednesday.

“I think they will have supplies available for the UK in a time frame that would allow it just to catch the mid-February target of getting the numbers up.”

Way Out of Lockdown

The UK is under its third national lockdown following the rapid spread of a new variant of the CCP (Chinese Communist Party) virus.

Neither can they go out to work if they can work from home, and socialising is restricted to within the same household and legally allowed bubbles.

Close-contact care home visits are prohibited, schools are closed to most pupils, most hospitality venues are closed, and travel is also restricted.

Vaccines are widely seen as the only way out of restrictions, and the UK government has pre-ordered 30 million doses of the Janssen one-shot vaccine candidate as part of the 350 million doses of various vaccines it has reserved.

In a vaccine update from Downing Street on Tuesday, Prime Minister Boris Johnson said over 1.1 million people in England and 1.3 million across the UK as a whole had already been vaccinated.

They were given either the Pfizer/BioNTech jab, which has presented distribution difficulties because it has to be stored at minus 70 degrees Centigrade super-cold temperatures, or the Oxford/AstraZeneca vaccine, which was administered to its first recipient in the world, an 82-year-old man in Oxford, on Monday.

Johnson said the aim was to have offered everyone in the top four initial target groups—care home residents and staff, the over 70s, frontline NHS staff, and the clinically extremely vulnerable—a vaccine by Feb. 15.

He said almost 1,000 sites across the country would be offering vaccines by the end of the week, with seven stadia or exhibition centre sites to be added the following week.