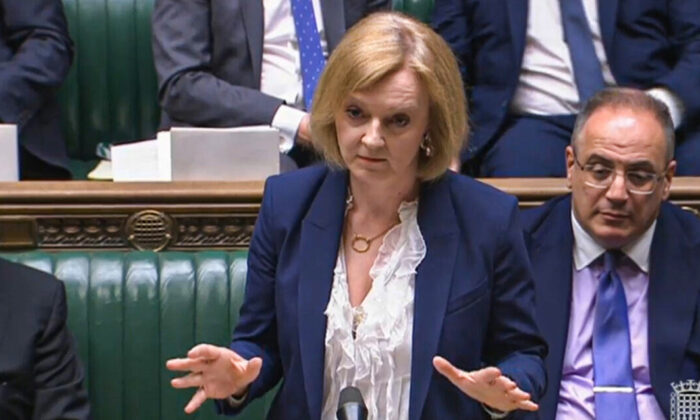 British Prime Minister Boris Johnson’s bid to tear up parts of the Northern Ireland Protocol has cleared its first hurdle in Parliament, with no Conservative MPs voting against it despite concerns the plans may break international law.

MPs voted 295 to 221 to back the Northern Ireland Protocol Bill, which contains measures to remove checks on goods and animal and plant products travelling from Great Britain to Northern Ireland, though dozens of Conservative MPs abstained, including former Prime Minister Theresa May.

“While a negotiated outcome remains our preference—the E.U. must accept changes to the Protocol itself,” she wrote on Twitter.

Johnson signed the Northern Ireland Protocol with the E.U. in 2019 as part of the Brexit withdrawal agreement, with the measures aimed at preventing a hard border on the island of Ireland.

But the protocol has been fiercely opposed by unionists in the British province, who complain that it effectively keeps Northern Ireland within the E.U. single market while erecting a border in the Irish Sea between the province and mainland Britain.

Northern Ireland has not had a functioning local government since February, when the Democratic Unionist Party, then the largest party in the regional assembly, withdrew from the power-sharing executive in protest against the protocol.

Talking to reporters at the G7 summit in Germany, Johnson said: “What we are trying to do is fix something that I think is very important to our country, which is the balance of the Belfast/Good Friday Agreement.”

He said the UK is trying to get rid of the “unnecessary barriers to trade between Great Britain and Northern Ireland” whilst “not in any way endangering the E.U. single market.”

But the move is bitterly opposed by the E.U. The European Commission has accused Johnson’s government of intending to “unilaterally break international law,” and has launched fresh legal action against the UK in retaliation.

Truss said the bill has a “strong legal justification” and the UK remains committed to seeking a negotiated solution, but some Conservative MPs were not convinced.

In the debate preceding the vote, Theresa May made clear she would not support the legislation as she warned it would “diminish” the UK’s global standing.

She told the Commons: “I have to say to the government, this bill is not, in my view, legal in international law, it will not achieve its aims, and it will diminish the standing of the United Kingdom in the eyes of the world, and I cannot support it.”

He said the bill “risks creating an impression to unionism that a black-and-white solution is available, when the reality is once this Bill has been dragged through the Lords, and courts, and E.U. responses and reprisals, compromise will ultimately be needed.”