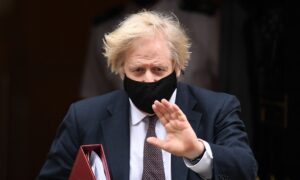 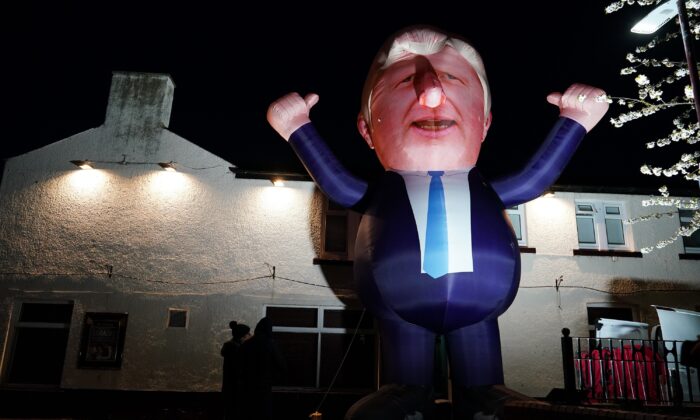 People walk past a giant inflatable representation of Prime Minister Boris Johnson outside the Mill House Leisure Centre where the count process for the Parliamentary By-election is taking place in Hartlepool, England, on May 7, 2021. (Ian Forsyth/Getty Images)
UK

Britain’s ruling Conservative Party scored a major victory on Friday when it won the parliamentary seat for Hartlepool, a traditional Labour stronghold, for the first time since it was created almost 50 years ago.

Conservative candidate Jill Mortimer took the seat, which had been Labour-held since it was formed in 1974, with a majority of 6,940.

The result was in part due to voters who backed the Brexit Party in 2019—when it took a quarter of the vote—switching to the Conservatives.

In her victory speech, Mortimer hailed the “truly historic result” and said she was “immensely proud to be the first Conservative MP in Hartlepool for 57 years.”

“Labour have taken people in Hartlepool for granted for too long,” she said. “I heard this time and time again on the doorstep and people have had enough and now, through this result, the people have spoken and have made it clear it is time for change.”

She pledged to work “tirelessly” for people in the constituency, adding: “I will not let you down, I will not fail you.”

Steve Reed, Labour’s shadow secretary for communities and local government, said the defeat was “absolutely shattering,” but blamed it on the previous Labour leadership under Jeremy Corbyn and its hard-left policies.

“I think what this shows is that, although we have started to change since the cataclysm of the last general election, that change has clearly not gone far enough in order to win back the trust of the voters, and we’ve just seen that in spades in Hartlepool,” he told BBC Breakfast.

But the Labour left—sidelined since Keir Starmer became leader last year—said the defeat shows that the party must now change direction.

Labour MP Diane Abbott, who was shadow home secretary during Corbyn’s leadership, branded it a “crushing defeat for Labour” and urged Starmer to rethink his strategy.

“Not possible to blame Jeremy Corbyn for this result. Labour won the seat twice under his leadership. Keir Starmer must think again about his strategy,” she wrote on Twitter.

The by-election was triggered when the previous Labour MP Mike Hill stepped down in March following claims of sexual harassment and victimisation.